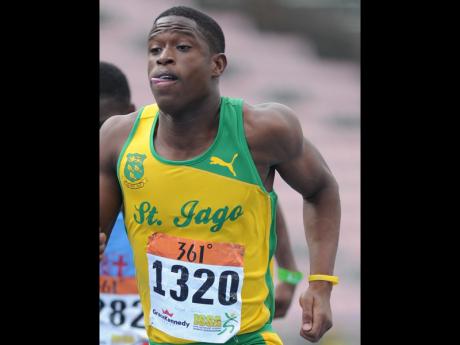 The 17-year-old Chambers secured his place after winning heat two in 10.68 seconds on yesterday's second day of track and field action.

However, the Jamaican is a doubtful starter for tomorrow's final. He held his hamstring about 10 metres before the line and had to be helped to his feet at the end of the race.

Chambers, if he competes, will enter the final with the fourth fastest qualifying time.

Meanwhile, Jamaica's representative in the women's 100 metres, Shanice Reid, failed to progress to the final despite finishing third in heat three.

Reid's time, 11.86, was the ninth fastest overall. Only eight will participate in the 100 metres final. However, Reid's time has qualified her for the B final, which will also be run tomorrow.

Ewa Swoboda of Poland clocked 11.30 to record the fastest time.

Obrian Wasome booked his place in the final of men's long jump competition with a leap of 7.13 metres. Wasome's jump is the seventh best going into Sunday's final.

Anatoly Ryapolov has the best jump of 7.65 metres.

In beach volleyball, Rojey Hutchinson and Shavar Bryan went down 2-1 to New Zealand's Nate Moore and Kahurangi Robinson in their Pool B preliminary round game yesterday. The pair will be hoping for better luck today when they take on Lithuania.