The Gleaner 180 Run aims to be 'most meaningful' 5K - PALS, UHWI to benefit from charity event 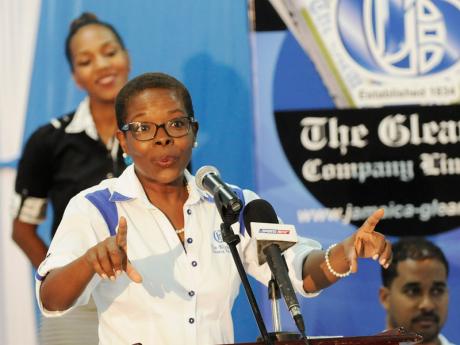 Child support organisation Peace and Love in Society (PALS) Jamaica, which is run by The Gleaner Company Limited, and the Physiotherapy Unit at the University Hospital of the West Indies (UHWI) are set to benefit from the inaugural The Gleaner 180 5K Run.

Christopher Barnes, managing director of The Gleaner, hopes the charity event - which fits into the company's 180th anniversary celebrations and will donate proceeds to the two bodies - numbers among the most meaningful and best attended.

"I certainly hope this will be one of the most meaningful events we would have seen in terms of giving back to the society. Our theme is 'Fit for Life, Fit for 180' (Gleaner's anniversary celebration)," Barnes said at the event's launch, at The Gleaner Company Limited's sports club, at its North Street base, yesterday morning.

He added: "We also hope it will raise much needed funds for the University Hospital of the West Indies (UHWI) Physiotherapy Unit and Peace and Love in Society (PALS). We certainly want to continue making an impact on the lives of people."

The event is scheduled for Saturday, September 13, beginning at The Gleaner's main entrance on North Street, continuing to South Camp Road; all the way up to Camp Road and Tom Redcam Drive, then on to Marescaux Road, past the National Water Commission and National Heroes Circle, straight down to East Street where it climaxes at The Gleaner parking lot on East Street.

Start time is 6:30 a.m. Also, provision is made for warm-up, beginning at 6 a.m., by Steve Ming of Spartan Health Club. Parking will be reserved for participants at Heroes Circle.

Dr Cecil White, executive director of the UHWI, noted The Gleaner's repute of excellence and humanitarian service, as well as the significance of its contribution to his organisation by way of the 5K.

"We are proud to be associated with Gleaner because of its history and reach," White outlined. "This partnership will make a huge difference in improving our facilities and service at UHWI.

"Because of Gleaner, I'm sure other companies will think of coming on board soon," White added.

Antoinette McLean, senior physiotherapist at UHWI, stressed that Jamaicans, unfortunately, have not always understood the importance of physiotherapy.

"We are grateful for The Gleaner because this is advertisement and promotion that we could not pay for. We hope their endorsement continues next year," she said.

Janilee Jiminez de Abrikian, general manager, PALS Jamaica, also expressed gratitude for the support to be derived from the event.

"We're grateful for this financial support, which will help us support projects like conflict resolution in schools and the West Kingston Transformation Programme," she said.

The organisers urged participants to sign up early, as the first 1,000 entrants will receive limited Gleaner 180 memorabilia as a bonus. There will be top prizes of $20,000 and gift vouchers from one of the sponsors - NCB, trophies for outstanding performers, and an award for the oldest competitor.

Registration can be done at The Gleaner Company; online at www.jamaica-gleaner.com/gleaner180run; at Running Events Limited, 87-89 Tower Street, Kingston, or at the UHWI Physiotherapy Unit.

"I've suffered from Guillain-Barre (disorder which can paralyse). Running was my medicine, so I am proud to be part of The Gleaner 180 5k Run. It will definitely offset some shortage of physiotherapy technologies at UHWI," Francis reiterated.