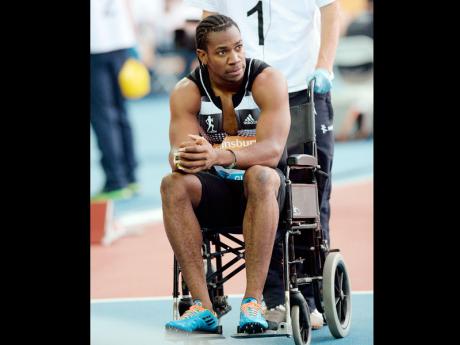 AP Yohan Blake leaves the track injured in a wheelchair after pulling up during the men's 100m on day one of the Diamond League meeting at Hampden Park, Glasgow, on Friday, July 11.

Jamaican sprinter Yohan Blake is recovering well after conducting surgery on an injured hamstring, this according to a member of his management team.

Blake's representative also used the opportunity to dismiss reports that the athlete recently purchased a house valued at $52 million.

While not able to put a timeline on the 2011 World 100m champion's return to the track, local manager Timothy Spencer noted that the 24-year-old is now handling the setback in a much better manner and has been reacting well to his rehabilitation, which has included several trips to Germany for sessions with noted doctor, Hans Wilhelm Müller-Wohlfahrt.

Blake, who missed most of the 2013 season due to injury, had to again call an early end to his season this year, after pulling up and falling to the track in a 100m race in Glasgow on July 11.

"It's progressing well to be honest," Spencer told The Gleaner, sharing the athlete's initial struggles to come to grips with a second tough injury setback in the space of a few months.

"As to when he will start back training, I can't tell you, but it's going very well. The aim is to get him back for the 2015 season and we are working towards that. We were in Germany about four weeks ago and, as I said, his rehabilitation has been going very well," Spencer indicated.

Spencer was, however, quick to deny reports that surfaced in some sections of the media that his client had recently purchased a state-owned property valued at $52 million.

"Yohan (Blake) or any member of his management team was not contacted regarding the accuracy of that story and Yohan has not purchased any property from the Government," said Spencer.

"Yohan's focus is now on his rehabilitation, which is going well, and his foundation. He is doing a lot of good work for the children of Mount Olivet Boys' Home and Garland Hall Memorial Home.

"He has a passion for underprivileged children who have no role models. It defines him. He really cares about them and he has been focusing on that and spending his extra time there," Spencer said.