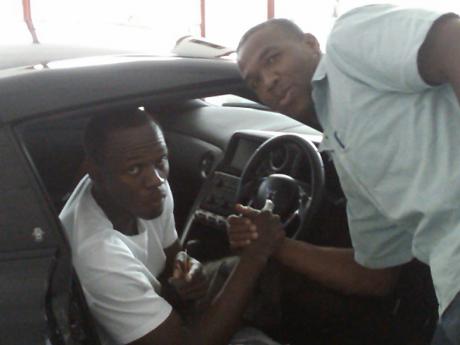 The St James football fraternity was thrown into mourning late Wednesday afternoon when businessman Macklin 'Dix' Peterkin, the treasurer of the St James Football Association (StJFA), collapsed while playing football and was subsequently pronounced dead at the Cornwall Regional Hospital.

"This is a sad moment for the football family in St. James ... we have not just lost a very good treasurer, we have lost a committed servant of football," said Gregory Daley, the president of the StJFA. "We want to express our sincere condolences to his wife and children and we wish to assure them that they have our fullest support."

The 43-year-old Peterkin, who operated the Kinns Auto Store on Tate Street, in Montego Bay, has been a lifelong football enthusiast whose passion for the game has all but become legendary.

According to reports, Peterkin and a group of friends were playing their customary afternoon football 'kick around' on a mini-field on the outskirts of the upscale Westgate Hills community when he collapsed and became unresponsive.

"I understand he was rushed to the Cornwall Regional Hospital and was pronounced dead," said Hanover FA vice president Craig Oates, a close friend of Peterkin. "I still cannot believe it ... the last time I saw him he was full of life ... there was nothing to suggest that he was not in great shape."

Ironically, the easy-going Peterkin, who was also a motor racing enthusiast, was instrumental in the transformation of the field on which he collapsed, from just an open lot into a lush green surface complete with portable floodlights to facilitate night games.

"I don't know many persons who love football as much as Dix," said Oates. "From I have known him, he has always being playing. In addition, he has contributed a lot of quality time and money to the game."

The soft-spoken Peterkin, who was in his second term as treasurer of the StJFA, was recently elevated to the position of chairman of the Jarrett Park Management Committee.