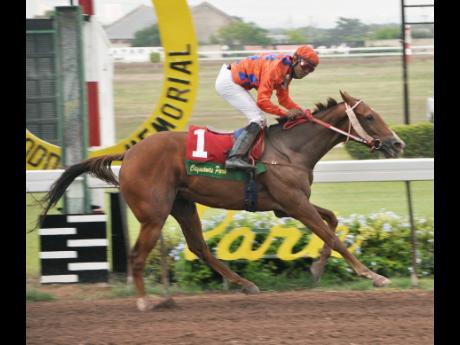 FRANFIELD yesterday outclassed his 10 overnight allowance rivals to win his second mile race at Caymanas Park in a month.

The Richard Azan-trained three-year-old colt broke sharply from post-position 10 under champion jockey Dane Nelson and prompted the pace with 99-1 outsider WARRIOR PRINCESS before shooting to the lead at the half-mile.

RED FLAG tried chasing FRANFIELD but was no match for the in-form colt. FRANFIELD bounded home clear of RED FLAG, who was relegated close home by ROYAL VIBES and MIRACLE STAR, closing as a team inside the last half-furlong.

Outclassed in this season?s three-year-old classics, FRANFIELD has improved into a strong miler and will next race among open-allowance horses.

Victory aboard 3-5 favourite FRANFIELD handed Nelson his second winner on the 10-race card after booting home WESTERN ROSE in the fifth event at 1400 metres.

He returned to close a three-timer with another favourite, 4-5 chance DR BLAIR, in the closing event at 1000 metres straight.

The champion jockey?s three-timer broke a lean spell of two racedays without a winner and pulled him within one win of Panamanian Dick Cardenas, 79-80, in their battle for the 2014 title.

Cardenas had few live mounts on the programme and his best finish was second astride ROYAL VIBES behind FRANFIELD.