Lindsay aims at Pan Am gold 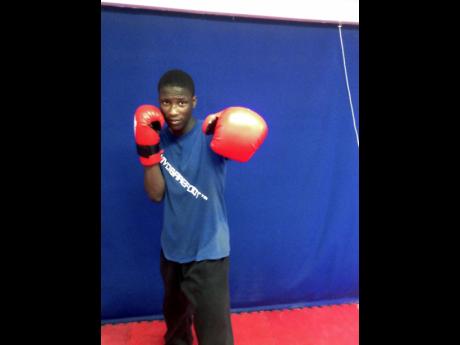 BY normal tae kwon do standards, when most kids start practising the martial art between 10 and 12 years old, Akino Lindsay is the proverbial late bloomer.

However, three years after being encouraged to join St George's College's team in the Jamaica Taekwon-Do McKay Security High School League, Lindsay, now 19, won a World Cup gold medal in August and has booked a spot to the October 23-26 International Taekwon-Do Federation (ITF) Pan Am Championships in AsunciÛn, Paraguay.

He believes he has an outstanding chance of winning a second international medal in Paraguay after beating Argentine Lucio Rodriguez and fellow Jamaican Donelle Stewart, in the final, to win World Cup gold at the Montego Bay Convention Centre.

"I drew Argentina first. Argentines are normally good fighters, probably the best this side of the world. He was about 26," Lindsay said.

It was fellow Jamaican fighter, black belt Adrian Moore, who, on his return from the 2012 World Cup in Brighton, England, told Lindsay he could win gold in 2014.

"I had a lot of encouragement from people like Adrian Moore, who told me he had gone to Brighton and hadn't seen many coloured belts around like me. I started to believe," he explained.

Lindsay is out to make the most of his final days as an adult coloured belt before grading for a red belt black stripe, the last step before qualifying for black belt.

ITF practitioners start as white belts, regardless of age, then move on to yellow, green, blue and red, grading for stripes between advancing to the next colour, the highest being black, which has varying degrees - first to ninth. Practitioners become masters at seventh degree and grand masters at ninth degree.

Regarded as a future top black belt, Lindsay has risen rapidly as a coloured belt since starting tae kwon do as a fifth former in 2011.

"I entered the sport at 16. It takes approximately four years to be a black belt. That's why I am not a black belt as yet," he pointed out.

Warming up for the US Open in July, Lindsay won coloured belt sparring gold at New Jersey's Ultimate Taekwondo Challenge in April.

Now in upper sixth form at Hydel High, for whom he won gold at last weekend's First Zendo Open, he is confident his new school will field a team in next season's McKay Security High School League, which he hopes to lead to the title.