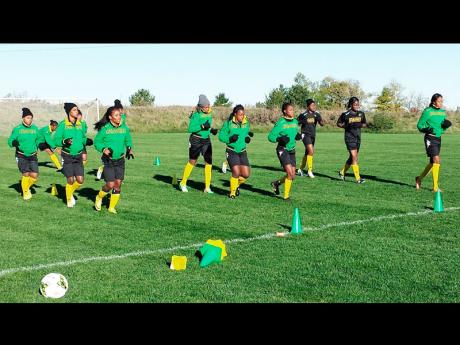 The Reggae Girlz warm up during a training drill in Kansas City, United States, yesterday.-photo by Gordon Williams

The Reggae Girlz will jumpstart their CONCACAF run towards making history at 5 p.m. local/Jamaica time at Sporting Park. A win would not only earn three valuable points, but boost confidence ahead of more fierce confrontations expected from other Group B rivals Costa Rico and Mexico, who close out today's double-header at 7:30 p.m.

Also in Jamaica's sights are results from Group A, which kicked off yesterday with Guatemala facing Haiti and the United States against Trinidad and Tobago.

Regardless of what lies ahead, however, the Girlz appear focused on today's task.

According to head coach Merron Gordon, although Martinique are ineligible to qualify for the World Cup as they're not affiliated with football's governing body, FIFA, they won't overlook their Caribbean rivals.

Jamaica, he explained, are "as ready as we can be", but admitted success will hinge on the team's ability to dictate match strategy.

"The Girlz are focused in terms of concepts," Gordon said after a near two-hour training session yesterday morning, which included physical and tactical sessions conducted in blustery winds and chilly temperatures. "We just need to execute. I am quite comfortable with our preparation."

"They are not as good athletes as us," he said. "I think our speed and athleticism will give us an edge."

Anything but a win, however, is not part of the coach's calculation ahead of clashes against Costa Rica on October 18 in Illinois and Mexico on October 21 in Washington, DC.

At stake for the top-two group finishers are semi-final spots, which assure the first three a place in Canada and the fourth a play-off against Ecuador for another World Cup berth.

"We are not looking past Martinique," said Gordon, "but we cannot drop any points against Martinique."

Sub-50 temperatures could again chill today's kick-off, but Jamaica may have other concerns. Among them is Omalyn Davis. The midfielder, coming off recent knee surgery, suffered a cruel setback yesterday, crumpling to the grass after making a pass. She complained of pain in her right leg, was excused from drills and wore an ice pack the remainder of the training session.

Earlier this week, Gordon said Davis was not a sure starter against Martinique, as she raced to raise her fitness level after rejoining the squad following Jamaica's second-place finish in the Caribbean Football Union Championships in August.

Although Gordon believes "she will be OK", Davis was expected to undergo further evaluation late yesterday.

No Jamaican female team has ever qualified for a World Cup. In 2006, the Girlz came close, but lost to Mexico in the semi-final.

A push for Canada will not only make history, but put shine on a national programme dimmed in recent times. The senior men's team failed to make the 2014 World Cup and has stumbled through a prolonged winless streak. Jamaica's last World Cup appearance was the 2011 Under-17 tournament in Mexico.

But the Girlz vow to change that after a month-long extensive training camp in the US, which cemented the team's bond and sharpened fitness and strategy.

"The spirit is good," explained captain Alicia Wilson yesterday. "We are good."

National pride is also at stake.

"It goes beyond football," Sweden-based goalkeeper Nicole McClure said of the team's ambitions. "It's bigger than I can tell you. We've adjusted well to the climate and conditions here and we should do well."