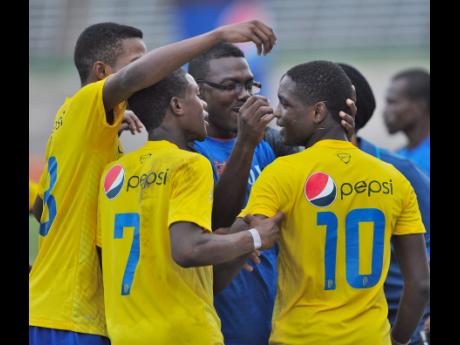 Manning Cup teams from the urban areas of Kingston and St Andrew and St Catherine held the upper hand over their rural daCosta Cup rivals yesterday in the round of 16 matches in the rich LIME Super Cup.

In Montego Bay, Wolmer's High stormed back from a goal down to eliminate St James High 3-1 after Camperdown easily dismissed Dinthill Technical 3-0.

Kevin Shaw, Ramiesh McKnight and Kevin Clarke were the scorers for Camperdown.

In the Wolmer's-St James clash, Romario Clarke opened the scoring for the daCosta Cup team before Shaquille McKoy found the equaliser as the schools went into extra time locked at 1-1. Jaheel Hyde and Joshaun McNought scored for Wolmer's in extra time.

In the opening game, Hydel edged Old Harbour 1-0 with Stephen Barnett getting the goals in the 46th minute.

Both teams battled to an exciting 1-1 scoreline at the end of regulation and extra time.

Seigel Knight put Clarendon in front when he scored a well-placed free kick in the 27th. Shamar Smith equalised for Holy Trinity in the 72nd minute.

Clarendon College were reduced to 10 players when Andrew Gutzmore picked up a second yellow card and was ejected by referee Gawayne Scott in the 72nd minute.

Knight and Oshane Coleman scored for Clarendon College, while Javaan Johnson, Malik Palmer and Roger Russell all failed from the spot.

Holy Trinity goalkeeper Antonio Millington was the hero for his team with two saves in the shoot-out. The 15-year-old denied Palmer and Russell.