'The Axeman' cuts down Donaire in sixth round 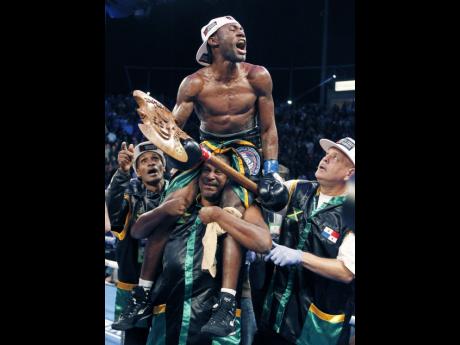 AP Nicholas Walters celebrates after defeating Nonito Donaire in the sixth round of their WBA featherweight title boxing fight on Saturday in Carson, California. 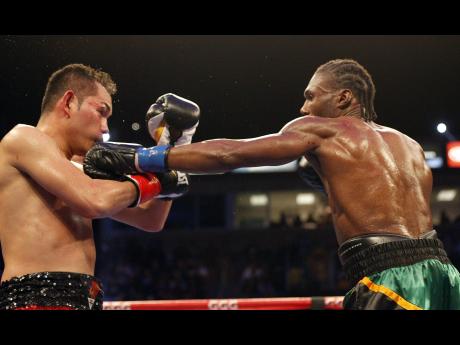 AP Nicholas Walters (right) throws a jab against Nonito Donaire in the sixth round during a WBA featherweight title boxing fight on Saturdayin Carson, California.
1
2

Jamaica's Golden Boy of boxing, 28-year-old Nicholas "The Axeman" Walters, served notice that he is on track to become one of boxing's greatest fighters, when he stopped 31-year-old Nonito 'The Filipino Flash' Donaire in six rounds, at the StubHub Center in Carson City, California, last Saturday night.

"We worked hard for this victory," Walters said. "Donaire is a super great champion. I know I have to respect him, and that's what I did. He caught me with a few shots."

talented weight class and who entered the ring with an impressive 33-2 record, including 21 knockouts.

Walters, with a 25-0 record and 21 stoppages, is now the World Boxing Association's Featherweight Super Champion, the title formerly held by Donaire, as opposed to their regular featherweight champion.

He was also awarded the Ring Magazine belt, which is given to the boxer who is regarded by them as the best in his weight class.

"I've never seen a featherweight with as much power as Walters," Top Rank promoter Bob Arum said. "Nothing like the concussive power this kid has."

Walters showed that he not only has punching power, but that he can take a punch. He was caught a few times by Donaire with his signature left hook, and just before the end of the fifth round, a hard right to the head hurt Walters.

Showing remarkable powers of recovery, however, Walters came back on the attack in round six, and it was curtains for Donaire when a counter right hook to the head sent him to the canvas face first. He barely beat the count, but was on unsteady legs, and the referee waived off the fight.

"I've got to go back to the drawing board," Donaire said. "I know I can't compete with guys like Walters."

An elated Walters and his father, Job, celebrated wildly, and Job, who celebrated his 55th birthday on Saturday, said: "This is the best birthday present that I could have received. Nicholas made me a promise and delivered it; I am a very happy man."