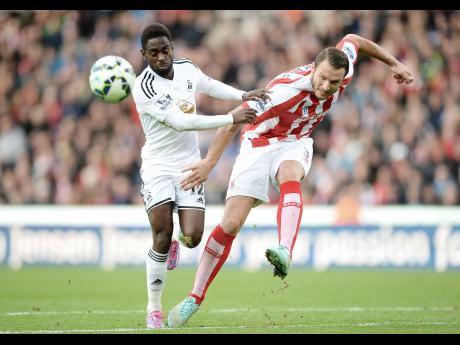 Danny Welbeck's goal in added time secured Arsenal another draw at the Emirates. Alexis Sanchez's low shot had given the Gunners an early lead, but a disputed Mohamed Diame strike, after the midfielder fouled Mathieu Flamini, and an Abel Hernandez-headed goal put Hull ahead. However, Welbeck guided in a Sanchez pass in the first minute of stoppage time to rescue a point, Arsenal's fifth draw of the season.

West Ham climbed into fourth place in the Barclays Premier League after Diafra Sakho scored his sixth goal in as many starts for the Hammers. Sakho opened the scoring with a header just after half-time. Enner Valencia added a second soon after with another header, and though George Boyd pulled a goal back for Burnley, a third header, from sub Carlton Cole, sealed the points.

Cesc Fabregas scored his first league goal for Chelsea as the Barclays Premier League leaders survived a late Crystal Palace fightback at Selhurst Park. Despite the absence of leading scorer Diego Costa, Chelsea went ahead with a 25-yard Oscar free kick. Chelsea's Cesar Azpilicueta and Palace's Damien Delaney were sent off before Fabregas finished a fine move. Fraizer Campbell replied for Palace with a late goal.

Everton secured only their second win of the Barclays Premier League season in a game that marked the return of wonderkid Ross Barkley. The 20-year-old started his first game of the season after suffering a serious knee injury and was outstanding as Everton took charge. Phil Jagielka gave the Toffees an early lead. Barkley set up Romelu Lukaku for the second and Seamus Coleman completed the win.

Newcastle fans had to wait to witness their team's first win of the season. Kick-off was delayed an hour over fears for the safety of a big screen at St James' Park, but it was worth the wait for the Toon Army, with Gabriel Obertan netting the game's only goal in the 71st minute.

at St Mary's in a game which saw Santiago Vergini score one of the Premier League's most spectacular own goals. The Argentine volleyed in from 18 yards, before Graziano Pelle and Jack Cork each scored from close range. Pelle's well-taken second followed a Liam Bridcutt own goal, and Sunderland keeper Vito Mannone passed to Dusan Tadic to make it six. Victor Wanyama and Sadio Mane sealed Sunderland's biggest loss in 32 years - and Saints biggest