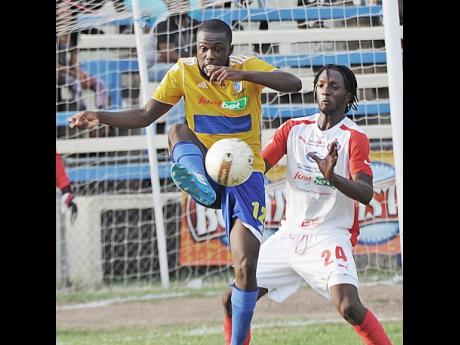 The home side pushed to eight points from six games courtesy of strikes by Jermie Lynch in the 34th and Ranique Muir (66th). On the other hand, Sporting Central remained on three points from three games.

Sporting Central, who had four games rescheduled due to the effect of the widespread chikungunya virus, looked lethargic and slow on and off the ball. Harbour View dominated for the most part.

Lynch, who won the Busta Man-of-the-Match award, paved the way for his team when he slotted past Sporting's goalkeeper, Allien Whittaker, in the first half. Muir made the game safe when he doubled the score.

Swaby, who was one of Sporting's players affected by chik-V, started on the bench and was introduced in the second half. However, he received two yellow cards and was ejected in added time.

Coach of Harbour View, Andrew 'Bower' Hines, was happy for the three points at home.

"I must credit the players for the win and performance for the club and community today (yesterday). They stepped up. It was a competitive game, but our players stood up to the task," Hines told The Gleaner.

Lynch, who netted his first goal of the season, was naturally pleased.

"It was coming, my first goal of the season, as I was out for nine months due to a toe injury. It was my job to score, and I did that, as we needed the three points," Lynch disclosed.

Sporting's coach, Nigel Stewart, said most of the players are just coming back from chik-V.

"We didn't come out running. I'm not proud of the performance. We will have to work on fitness, as the team could not train for about five days due to chik-V," Stewart said.

In another game, Rivoli United were leading Montego Bay United 1-0 when the game was called off because of lightning, in the 55th minute.