Reggae Girlz have no option 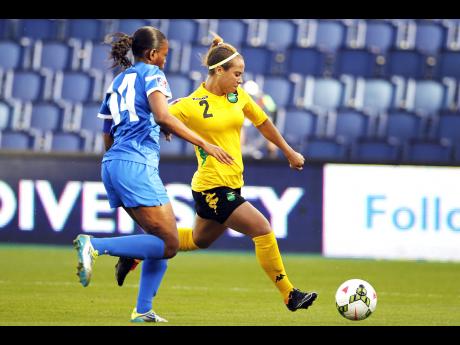 Colin E. Braley
AP Jamaica's Lauren Silver (2) gets past Martinique's Catherine Noel (14) during the first half of their CONCACAF Women's Championship football match on Thursday in Kansas City, Missouri.

Battle lines are drawn. Jamaica's mission is set. The Reggae Girlz must beat Mexico tomorrow in the

CONCACAF Women's Championship (CWC) to continue their bid for first-time qualification at a football World Cup.

There will be no other option at RFK Stadium in Washington, DC, following Mexico's 10-0 hammering of Martinique and Jamaica's 2-1 loss to Group B leaders Costa Rica here on Saturday night.

Mexico, despite being level on three points with Jamaica, hold a big edge on goal differential. Jamaica "only" beat their French-speaking Caribbean opponents 6-0 last Thursday, the same day Mexico lost 1-0 to Costa Rica.

Yet Jamaica's current predicament couldn't have surprised the team going into the CWC. Martinique, ineligible for World Cup qualification, was long considered the group's underdog. The fight for top-two places was deemed a straight contest between Jamaica, Costa Rica and Mexico. With Costa Rica already assured of advancing, even before a ball is kicked against Martinique in the first game of a scheduled double-header tomorrow, it's up to Jamaica and Mexico to decide who joins the Ticas in Philadelphia later this week.

"Even before the Martinique game with Mexico, we knew it would come down to this," said Jamaica's head coach, Merron Gordon, after Saturday's loss.

A win for either team seals a semi-final place. The best three of those four teams automatically advance to World Cup 2015. Fourth place will play off with Ecuador for another spot in Canada.

The record indicates Mexico will start favourites against Jamaica as the Girlz have never beaten El Tri. But the CWC has proven so far that Jamaica can not only compete, but have a good chance to win against more-favoured opponents. The Girlz have looked organised and passionate about their mission. On and off the field, the players appear to relish the contest, even after a questionable penalty and late goal beat Jamaica in a tough match against Costa Rica.

Admiration has come from CWC opponents as well. Rival coaches have been impressed with the Girlz's speed, skill and aggression. Although Garabet Averdissian of Costa Rica admitted both Jamaica and Mexico "have a good chance" to advance from the group, he believes the Girlz's qualities could "damage" the Central Americans.

The Girlz's chances will likely hinge on game-plan execution against Mexico. They believe they'll be ready despite Saturday's setback.

"It was very frustrating to lose (to Costa Rica)," said Jamaica's midfielder, Lauren Silver. "But we have high hopes to advance. I think we will be prepared."

There's no other option.