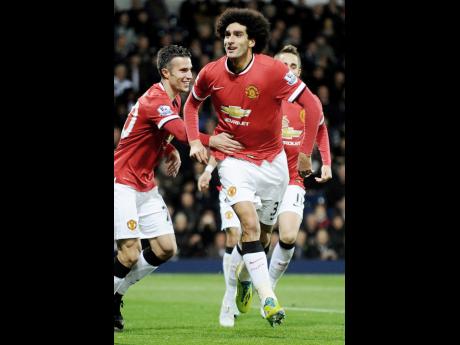 Manchester United came from behind twice to earn a 2-2 draw with West Bromwich Albion in the English Premier League yesterday, with Daley Blind scoring the second equaliser with three minutes remaining.

United looked like coming unstuck on the road again when Saido Berahino restored West Brom?s lead in the 65th minute, running clear of the defence to curl home a sixth goal in his breakthrough season.

Blind rescued a point for United with his first goal for the club, side-footing in from the edge of the penalty area following a layoff from substitute Radamel Falcao.

?I am very disappointed because we played our best match of the season and the result is not good enough,? said Manchester United manager, Louis van Gaal. ?I have to be also happy because we created a lot of chances.?

Stephane Sessegnon put West Brom in front at The Hawthorns with a rasping shot in the eighth minute, but Marouane Fellaini equalised in the 48th, having come on as a half-time substitute to give United more of a physical presence.

Fellaini chested down a cross from Angel Di Maria, shrugged off his marker and smashed in a rising shot from just inside the area for his first goal since joining from Everton in August 2013.

United dropped to sixth place on 12 points from eight games and are without a win in four away matches this campaign.