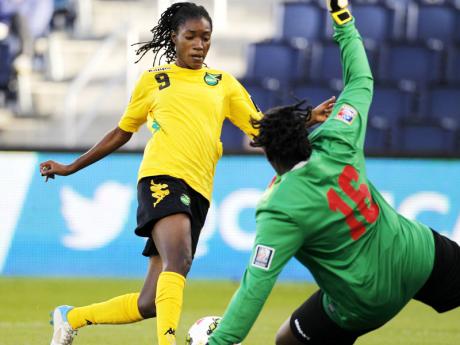 Jamaica's Shakira Duncan attempts to get past Martinique goalkeeper Cathy Bellune during the first half of their CONCACAF Women's Championship encounter. Jamaica won 6-0. Duncan will lead jamaica's charge in their must-win match against Mexico today. AP

WASHINGTON, DC, United States: Multiple campaigns, a month-long training camp and split results in the first two games of the CONCACAF Women's Championship (CWC) have all come down to this for Jamaica: win or go home.

With so much at stake, Jamaica face critical decisions on how to approach today's match-up.

After pumping in six unanswered goals against Martinique in the group's opening game, the Girlz's offence managed a single score in Saturday's loss to Costa Rica. Now Jamaica, facing another evening of chilly temperatures, must decide when to bring attacking heat to Mexico or defend. Miscalculation risks disaster.

"Wanting to win a game is a tricky thing," said Jamaica's head coach, Merron Gordon, after the 2-1 Costa Rica defeat. "You want to go after them in an organised way, not expose yourself on counter-attacks. We don't want to give up early goals."

Jamaica, however, wouldn't mind grabbing a quick lead, which would put the Girlz in a better position to dictate the contest. The Girlz believe they have the firepower - speed, skill and strength - to break down Mexico, which lost to Costa Rica 1-0 in group play. Shakira Duncan, who scored in both games, has looked Jamaica's most potent attacking force. Her pace and dribbling consistently troubled Martinique and Costa Rica. Donna-Kay Henry and Christina Murray, who both scored twice against Martinique, have also shown quality on offence.

Jamaica's edge, however, could be the return of veteran midfielder Omalyn Davis, who was sidelined by injury for the first two group games. Gordon, confident Davis will play a key role in the tournament, decided not to risk her recovery against Costa Rica. But, he admitted without naming Davis a starter, "there's no holding back" today.

Mexico face their own dilemma. Needing not to lose, El Tri, too, must decide on the best formula between attack and defence. Mexico have never lost to Jamaica, but are fully aware that the Girlz's quality could change that today.

"We know (Jamaica) is an athletic team with a lot of speed," said assistant coach Chris Cuellar.

"I think we'll see more of the ball," said Cuellar, "but we need to mark well when we're attacking".

The Central Americans have adequate firepower and Jamaica's defensive unit, led by captain Alicia Wilson and goalkeeper Nicole McClure, should expect to be tested early and often. After drubbing Martinique 10-0, Mexico lead the group in scoring and shots on goal with 56 - more than twice Jamaica's tally. Luz Duarte and Monica Campo have two goals each. But teenager Tanya Samarzich poses a threat as well.

"We expect big things from her," said Cuellar.

Coaches believe there's "no excuse" for Jamaica not to advance. A win guarantees the dream lives. "Strike hard" or it dies.