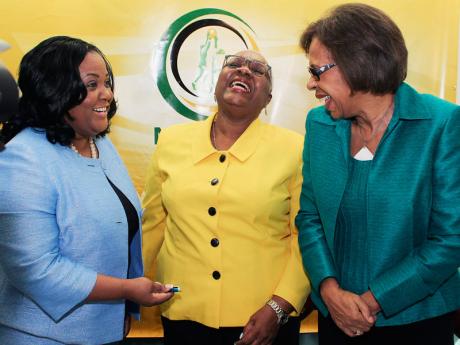 From left: Natalie Neita-Headley, minister without portfolio in the Office of the Prime Minister, with responsibility for sport; Marva Bernard, president, Netball Jamaica; and Molly Rhone, president, International Federation of Netball Associations, are in a fit of laughter at the launch of 'Gold Rush Down Under'. The event was held at the Jamaica Olympic Association yesterday. Brian McCalla/Photographer

In a bid to raise $63 million for the Sunshine Girls' preparation for and participation in next year's Netball World Cup (NWC) in Sydney, Australia, Netball Jamaica (NJ) yesterday passed off its 'Gold Rush Down Under' fundraising campaign and launched its new website mynetballJamaica.com.

The world championships will be held in August and NJ unleashed its 53-page website, which was designed by Gina Harrison and built by Sheldon Townsend, highlighting pictures and features of the Sunshine Girls.

Marva Bernard, president of NJ, urged corporate Jamaica and individuals to support the Sunshine Girls in their quest to capture the gold medal at next year's championships.

"In order for our campaign to be successful, we have to galvanise the nation and those Jamaicans in the diaspora who have been proud of our achievements," Bernard said at the launch, held at the Jamaica Olympic Association office in Kingston.

"I always remind people that we can't not qualify. We've already qualified by being ranked number four in the world, so we need just one set of funds to prepare and get there," she said.

Bernard identified some crucial areas that must be addressed in order to make it to the top of the podium. These include bringing back technical director Jill McIntosh, the Australian who assisted the Sunshine Girls' elevation to a bronze medal at this year's Commonwealth Games; and earning enough funds for salaries as NJ aims to get time off from work for the national players over a protracted period so they can train non-stop for the championships; the ability to get the use of the sprung wooden floor in either of the existing indoor facilities and at no cost to the organisation," she said, regarding their needs.

"Having the girls play at least two international series at home is also a must, and all this takes money," she added.

Bernard noted that a series of fundraising events had been planned and the e-commerce facility, which is part of its website, will make it easier for fans, supporters, and well-wishers at home and abroad to contribute.

"We plan a telethon, tin drive, our Sunshine Evening concert, and a number of parties for the young at heart," she disclosed. "Our Facebook page has moved from 300 likes in 2012 to 4,000 at present. We have fans in 45 countries. We anticipate them logging on to the site and making their contribution."

Minister without portfolio in the Office of the Prime Minister with responsibility for sports, Natalie Neita-Headley, said the Government is fully behind the campaign.

"Nothing tried, nothing done," said Neita-Headley. "If they are able to embark on this journey and are able to raise $50 million and they are $10 million short, then there would be $50 million more than they have today.

"It is a fabulous day for netball, and I think that the launch of the new website is an indication that we are becoming more creative, more innovative in our thought process," she said.