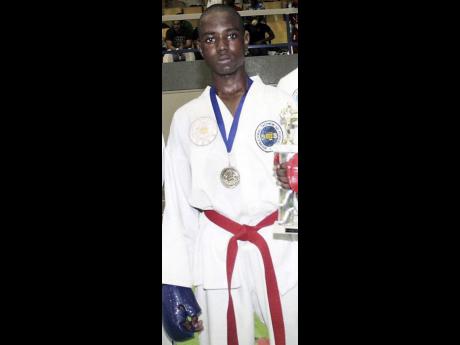 MICROWEIGHT Ackeem Lawrence has eyes on next May's International Taekwon-Do Federation (ITF) World Championships in Italy after returning from Ascuncion, Paraguay, last week with two Pan Am Champs medals - gold in sparring and a rare bronze in patterns.

He was one of two adult black belts in a team comprising mainly coloured belts and juniors who had medalled at August's ITF World Cup in Montego Bay.

Lawrence got his first taste of ITF World Championship competition in Benidorm, Spain, last year, and believes he will do well to be on the podium in Italy next May.

"In 2013, I made it to the quarter-final and lost to the Russian who eventually won the division," he pointed out.

However, beating the best in Europe won't be easy, especially with weight changes implemented in Spain.

"Since the weight category was pushed up, a lot of stronger guys are now in the division, good guys who normally fight at -63.0kg, but weren't winning because they were smaller than the bigger guys. It's easier for them to come down to -57.0," he explained, adding that this also makes for a much bigger microweight division.

Known as the 'patterns guy' due to his love of the demonstration techniques, Lawrence has impro-ved into a potent microweight fighter, winning bronze at the World Cup in Mon-tego Bay after losing to eventual champion Maxime Bujold in the quarter-finals.

He said the Pan Am Champs, his second trip to South America, was a tough tournament, especially the Argentines, who were out in great numbers.

"There were 16 competitors in the division. Winning

was hard because the South Americans' style is completely different from what I had seen since competing as a senior," Lawrence noted.

However, the invaluable experience he has gathered in overseas tournaments as a member of Jamaica's combined martial arts team has helped to add variety to his technique.

Lawrence was a member of Jamaica's team which historically won team-sparring gold at the World Cup in August, Jamaica's first at an ITF world tournament.