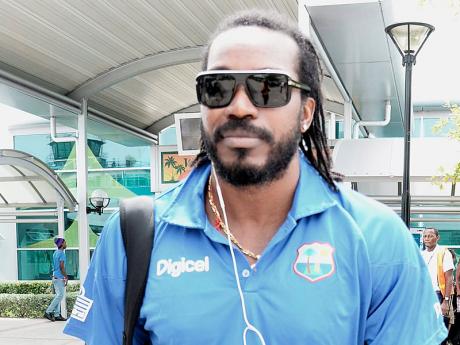 JOHANNESBURG (CMC): West Indies opener Chris Gayle says he is hopeful his team's tour to South Africa will go ahead despite a pay dispute between the players and the West Indies Players' Association (WIPA).

The tour of South Africa has been plunged into the doubt after the one-day team quit the tour of India last month over contracts row with WIPA and leaving a one-day international and a T20 unplayed, as well as three Test matches.

There are fears that West Indies will not tour in December, or that a second string team without the likes of crowd-pullers like Gayle, would be sent to South Africa.

"Hopefully, the dispute can be resolved and we will play against South Africa," Gayle said as he helped Lions win a South African domestic T20 first-round match in Johannesburg.

"The current situation between players and officials in the West Indies is unfortunate, but these disputes do happen occasionally. Talks are taking place to try and resolve the issue and I would love the South Africa tour to go ahead."

Gayle was referring to talks involving WICB, WIPA and CARICOM prime ministers, which appeared to have reached a resolution on the dispute.

West Indies are scheduled to play three Tests, three T20s and five ODIs during December and January in the only tour South Africa host before the World Cup.

Gayle took four for 36 in a four-over spell, before hitting six fours and two sixes when making 56 off 38 balls as Lions defeat Dolphins by six wickets on Sunday.