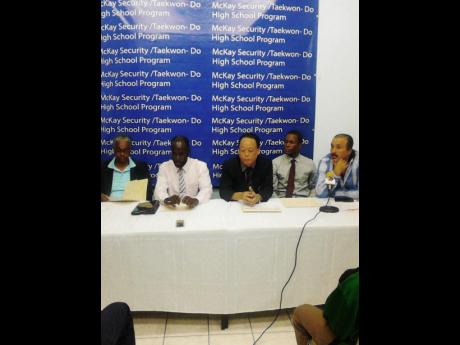 BOOSTED by the success of Jamaica's junior fighters on home soil at August's International Taekwon-Do Federation World Cup, followed by gold-medal performances two weeks ago at the Pan-Am Championships in Paraguay, Jamaica's tae kwon do 'incubator', the McKay Security high-school league, is back for a ninth season.

Launched yesterday at the Sports Development Foundation, the league returns with a revamped format and kicks off Saturday as the feature attraction at the Jamaica Taekwon-Do Association's Junior Open, set for the University of Technology's Alfred Sangster Auditorium.

League Director Jason McKay pointed out that the league, which comprises eight all-boy high-school teams, will be contested throughout the school year, September to July, as opposed to its previous January to December format.

"Reverting to a school-year format, not a calendar year, should make the league even more competitive as the boys, at times, travel during holidays, which depletes some of the teams," McKay explained.

"Keeping it within the school year, everybody will be at full strength, at all times," he added.

Team members from four of the teams were at yesterday's launch - defending champions Calabar, Kingston College, Wolmer's and Jamaica College, who, coach Nicholas Dusard warned, will be the team to watch this season.

The league, which operates under the Jamaica Taekwon-Do Association's banner, is completed by St George's College and Cornwall College.

"With some of the guys leaving school, some teams will lose premier fighters and others will come to the fore, so the favourites, Calabar, could be in for a few surprises this season," Dusard said.

Master Peter Lue, chief instructor at Jamaica Taekwon-Do Association, said the country's growth in the martial art, which has led to Kenneth Edwards being Jamaica's first representative at the Olympics, would not have been possible without the McKay Security Jamaica Taekwon-Do league.

"I have seen the programme grow over the years and the result of this we saw at the World Cup in Montego Bay when Jamaica won the adult black belt team-sparring title. This would not have been possible without the high-school league. It all started there," Lue said.