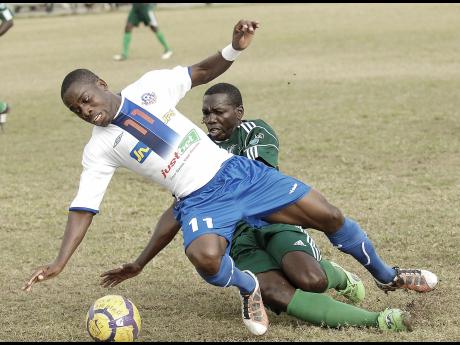 National senior player, Tramaine Stewart, on Wednesday night served notice of his return to local football by scoring one of three goals in Waterhouse's 3-0 hammering of rivals Tivoli Gardens in the Red Stripe Premier League (RSPL) at Drewsland Mini Stadium, in one of two rescheduled games.

With the win, the former champions marched to the top of the table with 19 points, two ahead of former leaders Cavalier, while Rivoli United improved their standing to fifth following their 2-1 win over Sporting Central Academy at Spanish Town Prison Oval.

Stewart's 29th-minute strike was the second of the goals at Drewsland and was sandwiched by Damarley Samuels' opener in the seventh and the final goal by Kenroy Howell in the 32nd minute.

"It feels good to get my first goal under my belt in my second game back on local soil," said a pleased Stewart, who previously represented August Town and Portmore United in the league after starring for Eltham High as a schoolboy.

"We lost in my first game, so it was really pleasing to bounce back like that. It was really important that we win, because we were in second position and, with this win now, we are on top. so all that we need to do now is to continue to play well or even better and keep putting the wins together," added the player whose professional contract, with Norwegian club Aalesund SK ended four months early by mutual consent earlier this year.

While not at his best, Stewart said he is getting back his

"I would not say my performance was the best, but it contributed to my team winning and I scored a goal. I will get better with time, but the important thing is to be playing and

Stewart, who initially is on a short-term contract with Waterhouse, said he feels at home at his new club.

"Waterhouse is a football club like any other, but the players, the management team and the fans have really been welcoming. I feel at home and will do my best to help them win the title," the Spanish Town resident said.

The 12-time capped national representative, who was not considered for the upcoming Caribbean Cup mainly due to inactivity, last represented Jamaica in December 2012 when the country did poorly in the Caribbean Cup, then held in Antigua. Despite the two-year absence, Stewart said the hunger for national caps remains.

"I always have the desire to play for my country, so when the opportunity comes, I will have to take it. They have not seen me play for a while, so now that I am here, I will get the opportunity to show what I have," said the 26-year-old, who is looking to return to Europe or head to North America in the not-too-distant future.