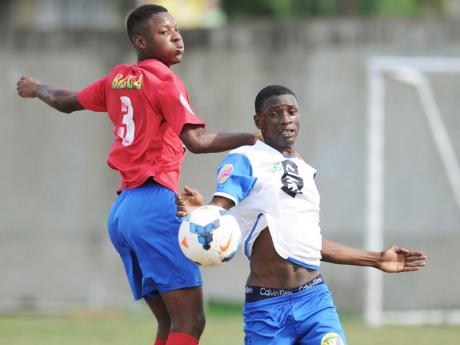 In the first game of a double-header at Spanish Town Prison Oval in St Catherine, Camper-down and Hydel battled to a dramatic 2-2 draw. And, in the second game, Charlie Smith drubbed Vauxhall 5-0.

Ajuma Johnson hit a brace for Camperdown in the 54th and 87th minutes, while Hydel's captain Kurt Thomas (71st) and Jonthe Brown (84th) got the goals for their team.

Camperdown entered the game needing to avoid defeat in order to advance, and achieved that in dramatic style. The east Kingston-based school scored first, but Hydel hit back twice. And, with three minutes remaining in regulation time, Camperdown equalised and earned a crucial point.

Camperdown ended on seven points, ahead of Hydel (five), St Jago (two) and Kingston College (one) in Group K.

In the other double-header at Constant Spring, Kingston College and St Jago finished 1-1, while Innswood defeated Norman Manley 4-1.

"We have not lost in the Manning Cup, so I was always confident," Bender told The Gleaner.

"Apart from the two set pieces that Hydel scored off, we controlled the game. No praise is too high for the team. Now that we are in the semi-finals, we have a shot at the title," Bender pointed out.

On the other hand, Hydel's coach, Donovan
'DV' Hayles, said the result was heartbreaking.

"We
did enough to win the game, but let it slip in the closing minutes.
Hydel is a team to be respected," Hayles said.

Shemar Pryce netted four times to lead Charlie
Smith into the semi-finals. Pryce scored in the 61st, 80th, 86th
minutes, as well as stoppage time. Bebeto McDonald scored the other goal
in the 70th minute.

Vauxhall came into the game in
need of a win in the case that Innswood did not beat Norman Manley. The
Vauxhall team battled hard for two-thirds of the game, but as soon as
Charlie scored the opening goal, the flood gates
opened.

Jerome
Waite, Charlie Smith's long-serving coach, said he was not too worried
about the first half, as his team is a second-half
side.

"I was confident that the team would rise to the
occasion. Now, we will go back in training and prepare for the
semi-finals," Waite reasoned.

George Forbes, ISSA's
competitions officer, told The Gleaner that the
semi-finals are scheduled for Saturday, November 15 at Stadium
East.

Wolmer's will face Charlie Smith in one
semi-final, while defending champions Jamaica College meet Camperdown in
the other.