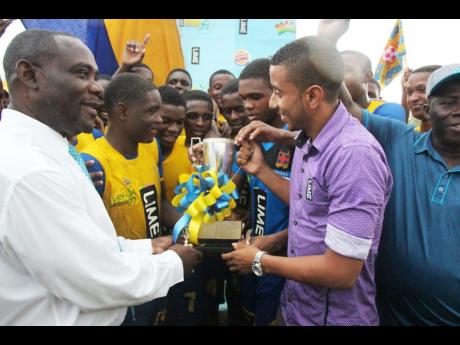 In a hard-fought final played in persistent rain for 20 minutes of the first half, as well as a soggy outfield field which helped in creating many near misses at goal, McCulloch a 17-year-old from Savanna-la-Mar, rifled home an angled shot from 20 yards. The late goal virtually sealed the championship as it left hardly any time for a Glenmuir to recover.

STETHS' dominance in the knockout competition began under Andrew Edwards in 2010. Edwards was at the helm a year later for his second, but the last three have been credited to current coach Omar Wedderburn. An enthusiastic assistant manager, Sherwayne Banton, told The Gleaner that STETHS "owned" the Ben Francis Cup.

"They (ISSA) (had) better leave it here - it's ours to keep. To win a knockout title five times straight - you can hardly get better than that," Banton said.

McCulloch's late winner probably saved the Inter-secondary Schools Sports Association hierarchy on hand some anxiety as the light was fading fast and there was uncertainty as to whether extra time or penalties could have been accommodated at a venue without lights.

Earlier, Glenmuir had a very easy chance to take the lead. In the 51st minute, their captain, Ricardo Dennis, who perhaps delivered the best individual performance, got behind the STETHS defence, flicked the ball behind goalkeeper Carson Findlay only to see it ricochet off the right upright. He still had the presence of mind to collect the rebound, but miskicked and allowed STETHS' burly defender, Rushane McClymont, to clear.

Losing coach Warren Simpson, who still has another chance to earn silverware when his team competes in next week's daCosta Cup semi-finals against Clarendon College, praised his team's courage.

"I cannot fault my boys; they gave it all they could. We should have scored, but I am still proud of my boys for the way they played in the second half," Simpson said.