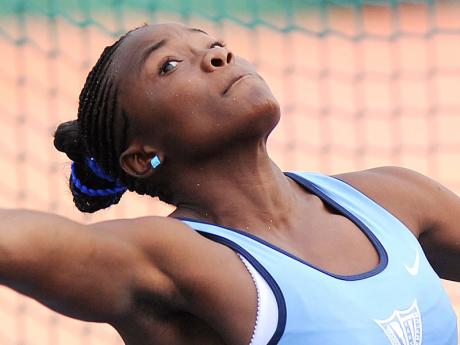 Discus throwers Tara-Sue Barnett and Vanessa Levy will look to beef up what has been a meagre medal tally for Jamaica at the Central American and Caribbean (CAC) Games when they take part in the women's final at 12:30 p.m. today.

It would take something special for the duo to break into the top-two spots, however, with the Cubans, much as they have for most of the Games, again expected to dominate the event.

While Barnett has an early season's best of 54.91 metres and the up-and-coming Levy, 47.95 metres, both Cubans in the event - Denia Caballero and Yaime Perez - have already broken the 60-metre barrier with marks of 64.89m and 66.03m, respectively.

On form heading into the competition, however, Levy has the third best distance.

Samantha Curtis will have even more work to do to upset the odds heading into today's 400m women's final, after qualifying with one of the slowest times.

Curtis, who did not look entirely comfortable on the cold, damp afternoon, finished third in 55.24 seconds in the first of two semi-finals. Colombia's Yenifer Padilla (53.70) won, finishing ahead of Cuba's Daisiuramis Bonne (52.88).

Cuba's Ines Veitia was the fastest qualifier for the final, after clocking 52.54.

On form heading into the event, Aubrey Allen will have very little chance of conquering the sand pit when he represents the nation in the men's long jump final.

Allen heads into the event with a personal best of 7.26 metres, a mark the majority of the 17 other athletes in the field have covered this season.

In other events on the track, André Clarke will look to secure himself a spot in the men's 400m hurdles final, while Nassive Powell, Marzel Miller and Gayon Evans should all be in action in the 200 metres preliminaries.

In action yesterday, Raymond Brown proved to be the lone bright spark in track and field, after claiming a bronze medal in the men's shot put, with a throw of 18.30.

The medal made it three overall for the country, which captured another bronze medal courtesy of squash player Walter Lewis.

Lewis received joint third place, along with Mexican Arturo Salazar, after the pair both lost their semi-final match-ups.

Alvin Green and Keagan Campbell saw their bids for a spot in the men's 400-metre final end in disappointment after finishing seventh and fifth, respectively.

At the Palmas Racquet Club, Dominic Pagon and Davian Burrell teamed up to defeat Grenadians Aaron Moses and Yannick James in straight sets (6-2, 6-3) to advance to the tennis doubles second round.

Jamaica did not have similar success at the Racquet Centre, however, where the pair of Mary Mahfood and Alyssia Mullings went down in straight sets to the Colombian duo of Laura Tovar and Karol Gonzales in women's squash doubles action.

Despite winning a set against the Guatemalan pair of Edwin Enriquez and Antonio De La Toure, Chris Binnie and Bruce Burrowes suffered a similar fate in men's doubles.

Lewis Walters and Tracey Binnie were the third pair to lose when they failed to win a set against the Cayman Islands' Cameron Stafford and Marlene West.

At the Benito Juarez Auditorium in Veracruz, the Jamaican men's basketball team suffered their second straight defeat, going down 79-66 to Cuba.