Ja's track and field team leaves CAC with one medal 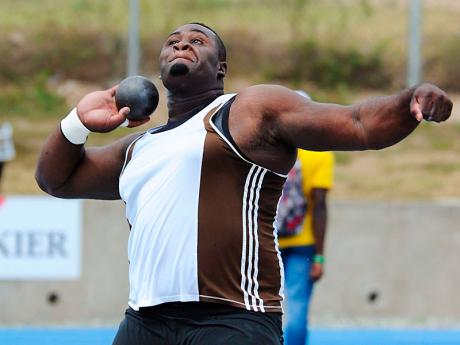 VERACRUZ, Mexico:Jamaica's participation in the track and field segment of the 2014 Central American and Caribbean Games in Veracruz, Mexico, came to a close with less thunder than generally associated with the nation at a championship, but the meet was in no way a total loss for many athletes involved.

The country earned one bronze medal in six days of athletics competition, for a combined overall tally of three, adding to the bronze and silver mined in the disciplines of squash and tae kwon do.

On last day action the men's 4x400m quartet, defending champions in the event, clocked 3:11.01 to finish in sixth spot, after failing to track the fast-starting Cuban team, who claimed the event in a new championship record time of 3:00.70. Second place went to Venezuela in 3:01.80 and third to Colombia in 3:02.52.

The event brought a close to a very successful championships for the Cubans 22 gold, 14 silver and eight bronze for a total of 44 medals on track and 212 overall. Other Jamaicans in final day action had included Aubrey Allen, who finished tenth in the men's triple jump, an event won by Cuba's Luzaro Maritnez with a distance of 16.91m.

Javelin thrower Orrin Martinez also failed to make a huge mark on the field, finishing in seventh spot with his best mark of 68.62m. The powerful Cuban Guillermo Martinez dominated from start to finish registering 79.01m on his first attempt, before closing the competition with a gold medal winning throw of 79.27m. Martinez's closest challengers on the day were local boy Juan Mendez (76.80) and country man Osmany Laffita was third in 76.28.

Despite booking a spot in the final, veteran sprint hurdler Eric Keddo faded after a solid start out of the blocks to finish in seventh spot.

"To make the final is something I was happy for. We didn't bring our best here and it's not just about the top athletes. Right now we are in the general preparation phase so a lot of the explosiveness is not there," Keddo said following the event.

For former Edwin Allen champion athlete Tara-Sue Barnett, who finished sixth in the women's discus final it was a good learning experience and one to build on for what she hopes will be a strong season ahead.

"It was good to be competing with such strong competition. I really tried but I was off with technique and I gave it a good shot," Barnett said.

At the Reino Magico the duo of Christopher Walters and Ryck McKenzie got the better of the US Virgin Island's Juan Rosa and Edward Peter for a first win in the preliminary round group A, after six matches played in men's volleyball, and the Jamaican women's team defeated Honduras 2-1 to secure ninth place.

At the racquet centre Jamaica's women's squash team were defeated 3-0 by Colombia after Alyssa Mullings, Mary Mahfood and Tracy Binnie all lost in straight sets.