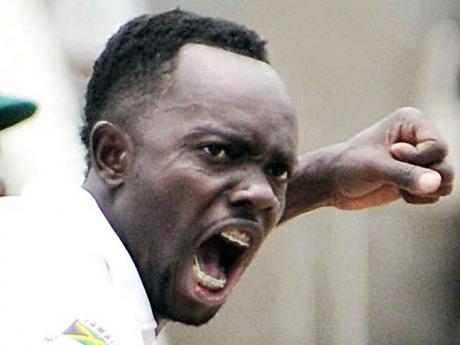 Seasoned campaigner Nikita Miller helped Jamaica Franchise's tail wag and then returned to strike a key blow with the ball to leave Trinidad and Tobago Red Force with a difficult task of winning their third round WICB Professional Cricket League game on today's final day.

Chasing 239 for victory, Trinidad and Tobago were 24 for one at the close, with Lendl Simmons on eight, and nightwatchman Marlon Richards yet to score.

It was Miller who set back the hosts, having the dashing Evin Lewis caught at short-leg by Shacaya Thomas, in the penultimate over of the day at Queen's Park Oval.

As usual, Lewis was shaping up nicely, having faced 27 balls and struck a boundary. His dismissal at 23 for one was a major blow to the hosts, who were heading towards the close without losing a wicket.

They require a further 215 runs for their second straight win of the new tournament.

Earlier, Jamaica were dismissed for 196, after resuming on 92 for four, on a rain-hit third day. They seemed headed for much less when the slumped to 159 for nine, but Miller intervened with a crucial knock of 40 that allowed Jamaica to pick up precious runs at the end. He faced 95 balls, occupying the crease for 1-3/4 hours while striking two fours, adding 37 for the last wicket with Sheldon Cottrell, who scored 12 not out.

Miller and Damian Jacobs, who hit an equally important 29 in nearly two hours at the crease, put on 25 for the eighth wicket to get the lead up to near the 200-run mark. Jacobs got a leading edge and was caught and bowled by debutant fast bowler Daniel St Clair (3-38) and Marquino Mindley followed for five, taken at point by Simmons off spinner Akeal Hosein (2-18).

AT THE GRENADA NATIONAL STADIUM: Windward Islands Volcanoes have been set 136 for victory on today's final day against Leeward Islands Hurricanes.

AT THE GUYANA NATIONAL STADIUM AT PROVIDENCE: Barbados Pride, following on by 160 runs against Guyana Jaguars, were 214 for seven in their second innings at the close of yesterday's third day.