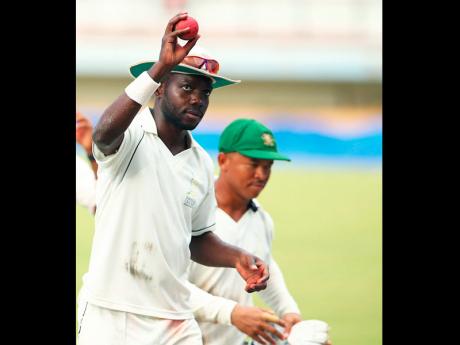 Chasing 239 for victory, T&T buckled under the weight of Miller's seven for 63 and were all out for 201 at Queen's Park Oval.

The win was Jamaica's second in the new West Indies Cricket Board (WICB) Professional Cricket League (PCL), while T&T suffered their first defeat.

Wicketkeeper Nicholas Pooran top scored with 55, Akeal Hosein struck 35 not out and captain Rayad Emrit, 30, while opener Lendl Simmons chipped in with 27.

Resuming the day on 24 for one, T&T slumped to 84 for six just after lunch and seemed headed for an early defeat until the lower order put up a fight.

Nightwatchman Marlon Richards failed to score, popping a catch off to Shacaya Thomas at short leg off left-arm seamer Sheldon Cottrell at 29 for two in the second over of the day. Jamaica's bowlers then tested Lendl Simmons' patience with tight bowling, trying down the right-hander, before Miller had him stumped in the same over in which he cleared the ropes for the only six of his 56-ball innings.

In his very next over, Miller had Jason Mohammed caught at slip without scoring by Jon-Ross Campbell off the second ball he faced, as T&T limped to 53 for four.

Pooran and Yannick Ottley (7) posted 31 for the fifth wicket to guide the visitors to 81 for four, when rain forced an early lunch.

However, Miller claimed Ottley and Steven Katwaroo (0) almost immediately on resumption, but Pooran and Emrit stalled Jamaica's progress with a defiant 65-run stand for the seventh wicket.

Pooran was his usual positive self, facing 86 balls and striking five fours and three sixes, while Emrit was equally assured with four fours and a six off 48 deliveries.