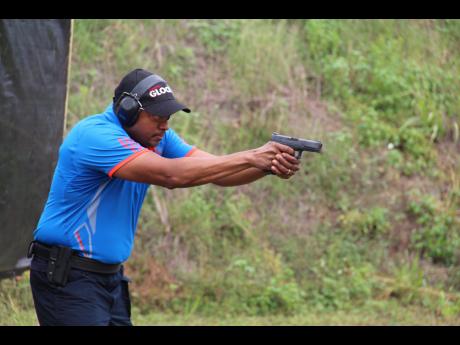 Woodleigh's Fast and Furious 4 turned out to be a thrilling affair at the May Pen range on Sunday. The rivalry among shooters took an unexpected turn when Jamaica's top shot, Acai Custom Gun-sponsored Lesgar 'Speedy' Murdock, switched from the Open Division to face Orville 'Reds' Henriques and Andrew Yapp in the Standard Division.

United States-based Murdock did not disappoint. He disposed of his challengers in true grand master fashion, taking the high overall trophy for the division in a display of extreme speed and marksmanship ahead of Master Class winner Henriques, and Yapp.

The Production Division was also drama-filled as Ryan Bramwell took on his long-time coach, senior veteran Anthony 'TJ' Johnson, who stepped out of the Open Division to take on his mentee.

However, the tall and fleet-footed Bramwell sped away from 'TJ' with an 87 stage-point advantage to take the division. Up-and-coming Craig Hendrickson grabbed third spot from experienced Christopher Hart by 17 stage points.

Bramwell, who won all seven stages in the division, said the highlight of the match for him was stage three. He said the targets were "up close and personal" enough for him to just run and gun as fast as possible, finishing the stage in a mere 10 seconds, amassing 102 points of 110.

Open Division was left to Lennie Moulton, hot off the World Shoot competition, in Frostproof, Florida. Moulton took on Kevin 'No Good' Cheung and won five stages to his rival's two.

"The training of more range officials throughout the last couple of months allowed the turnaround of the squads on a timelier basis than previous matches," Chin Hing revealed.

The seven-stage 140-round ammo tournament was held under International Practical Shooting Confederation rules for the first time.

There are three matches