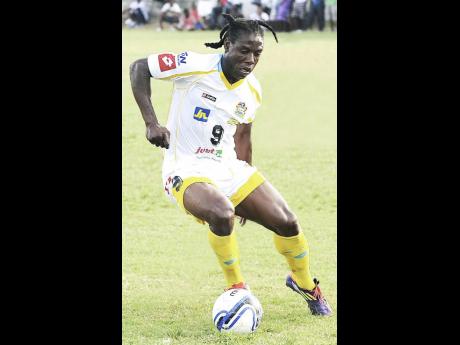 Former national representative Jermain 'Tuffy' Anderson reminded many on Monday night why he was christened 'Mr Monday Night', as he rescued leaders Waterhouse from a home defeat to 11th-placed Barbican Football Club.

The 35-year-old scored two wonderfully executed headers, the second better than the first - in the 66th and 84th minutes - to wipe out the lead created by Jermaine Parris for Barbican in the 33rd minute.

"Once you get a name, you have to live up to it. I work hard and that is the name the people give to me, and I just have to live up to it," said the player who, prior to his departure for El Salvador last season, was called Mr Monday Night because he always scored on games televised on a Monday night.

Anderson did not score last week when Waterhouse were held to a 0-0 draw by Sporting Central. In fact, Anderson's last goal was against Harbour View in a 1-2 home loss for Waterhouse on October 29. That goalless run, he is confident, is now behind him.

"I think I am back now to stamp my class in this league and I am going for the golden boot. In my camp, we have a trainer who works with me, and as you can see in the match days, I always work hard. It was just to get the goals. I never give up and I am just happy to let the people know I am back," declared Anderson, who now has six goals, five less than leading scorer Craig Foster of Reno.

Anderson said that the scoreless run was not a worry for him as he has enough experience to know that there would be times like those.

"I have six goals and am working hard. I am just back in the league now, fresh from overseas. I am coming back and I am taking it one game at a time and, as I have said, my name will never fade away, no matter what.

Monday night's win opened up a five-point gap for Waterhouse over Montego Bay United at the top of the table, ahead of their clash on Thursday in Montego Bay.

Anderson was also full of praise for Tramaine Stewart, whose second-half introduction energised the team and swung the flow of the game in their favour.

"Tramaine is the player we brought in to help build the team so we have to work with them. He knows his job is very important out there and that is what we brought him in the team to do, to play a vital role and lift us when we are down and lift us higher when we are up, and he did that tonight," Anderson offered.