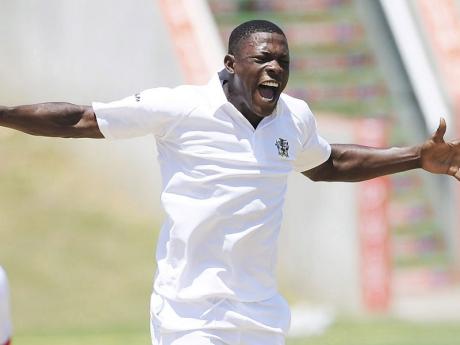 Marlon Samuels made a bold statement ahead of next week's start of the three-Test series, pummelling an entertaining, unbeaten hundred on the opening day of their three-day match, as West Indies made a strong start to their tour of South Africa yesterday.

The right-hander finished the day on 103 from just 102 deliveries, an innings that propelled the tourists to 217 for two against a South African Invitational XI at Willowmoore Park.

He was joined by in-form opener Devon Smith, who was also closing in on three figures at the close, unbeaten on 83. The pair have so far added 182 for the third wicket.

Earlier, West Indies blew away the hosts for a paltry 125, with left-arm seamer Sheldon Cottrell taking five for 16 from just 6.1 overs.

The 25-year-old, who only arrived in South Africa on Sunday to join the squad, accounted for the first four wickets to fall before returning to take the final wicket with the first ball of a new spell, just after lunch.

Aviwe Mgijima top-scored with 35, Clyde Fortuin chipped in with 34 while Stiaan van Zyl scored 23 and were three of only four batsmen making it to double figures.

In turmoil at 55 for six, Mgijima and Fortuin combined to rescue the Invitational XI's innings in a 69-run, seventh wicket stand.

The 26-year-old Mgijima faced 64 balls in 96 minutes at the crease and struck four fours and a six, while Fortuin, a 19-year-old right-hander, faced 70 balls and counted seven fours in just under 13/4 hours.

Left-arm spinner Sulieman Benn broke the stand when he bowled Fortuin, sparking a collapse which saw the last four wickets tumble for one run in the space of 10 balls.

The right-handed Brathwaite lasted nearly an hour and struck two fours before playing across a full-length delivery and adjudged lbw at 34 for one.

Three balls later with just one run added, Kleinveldt found the outside edge of the left-handed Johnson's bat for van Zyl to take the catch at second slip.

That was the end of the hosts' success, however, as Samuels joined Smith to dominate the remainder of the day's play.

Samuels stroked 19 fours, while Smith struck 12 fours and a six off 144 balls, in a partnership that saw the Windies score at over five runs an over.