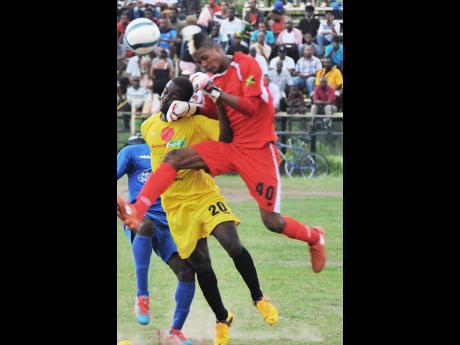 Barbican moved to within a point of ninth-placed Reno and increased their lead to two over 11th-placed Humble Lion when they played to a 0-0 draw with fifth-placed Cavalier on Monday night, and they have Nicholas Campbell to thank.

The 24-year-old goalkeeper dove well to his left to save a first-half penalty from forward Claudious Blackburn to deny the more fancied Cavalier a win. Blackburn's miss was Cavalier's best opportunity even though utility player Girvon Brown had a hat-trick of misses.

While Barbican were happy for the point, hero, Campbell, a newcomer to the Premier League having earned promotion with Barbican, said saving penalties is commonplace for him.

"It was a good penalty save, but it is a regular for me. This is nothing new. It was a penalty shootout that we used to get to this level. I saved penalties to get us here," said the player, who has been with Barbican for four years.

"It is a great joy still, as long as those who are behind us are still behind us, we are happy," he continued.

Speaking with a great deal of confidence, Campbell made it clear that Barbican belonged in the Premier League and that they will remain.

"These teams are not better than us. It is just for us to gel right, communicate right and play better and we will be getting more three points from games. We will show our class," the six-footer said.

Campbell's route to top-flight football is different from most players in the league. Unlike them, he did not play high-school football, so he developed under the radar.

"I went to St Joseph's High School, a private school, so I did not play high-school football. I became a goalkeeper when I was at Phoenix at about 16 years of age when Craig Butler put me in the goal because I was tall, and I have never come out of it.

"My goalkeeping talent is mainly raw. People have helped me, but it is not enough for a goalkeeper. I have not had much formal coaching, but I am confident in myself," the man who grew up in Standpipe said.

Having fulfilled one dream in playing in the Premier League, Campbell is aiming at another.

"I have never played for a national team before, but my dream is to be there any moment now. Mr (Miguel) Coley has told me to keep pushing and pushing harder, and I am doing that, and I know that

one day, I will be there," he said confidently.