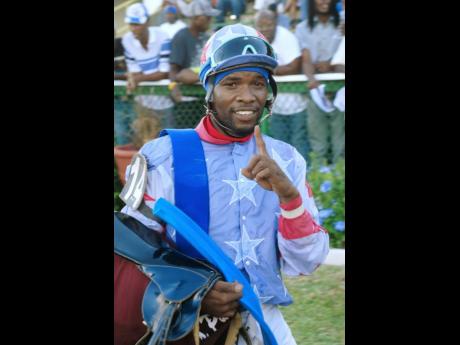 RETURNING champion jockey Dane Nelson has reportedly been jocked off COME DANCE WITH ME for Friday's $4.25m Jamaica Two-Year-Old Stakes.

However, he has, in turn, picked up the ride aboard ALACRANN, replacing Andre Martin, who had won November's Pick-3 Super Challenge astride the Anthony Nunes-trained colt.

Gleaner Sports sources are reporting that Shane Ellis has been called in by trainer Dwight Chen and owner Howard Hamilton to partner COME DANCE WITH ME.

COME DANCE WITH ME and Wayne DaCosta's POLLY B had engaged in suicide splits, 22.4, 45.4 and 1:12.2, in November's Pick-3 Super Challenge. Cardenas and Nelson put pedal to metal from the start and ended up playing into ALACRANN's last-furlong surge at 1400 metres.

ALACRANN was comprehensively beaten by COME DANCE WITH ME and POLLY B in consecutive races but returned for the longer Pick-3 Super Challenge, second leg of the SVL Series, treated with Lasix and with the spotlight focused on his rivals.

The Jamaica Two-Year-Old Stakes, the third and final leg of the Supreme Ventures Limited Two-Year-Old Series, will not only settle the score, a hot rematch at a mile, but also set the stage for next season's three-year-old classics.

The top three are gunning for victory in an 11-horse line-up which includes BALLON D'OR, stablemate of ALACRANN and only horse in the field to have won at a mile. Meanwhile, Cardenas' move to Florida has handed in-form Robert Halledeen the ride aboard POLLY B.

COME DANCE WITH ME, unbeaten in two races prior to the Pick-3 Super Challenge, has worked brilliantly for Friday's race. She galloped six furlongs in 1:14.4 last Tuesday. POLLY B posted 1:16.2 for the distance the previous morning and ALACRANN warmed up with a half-mile spin in 48.3 on Sunday.