Offer too good to turn down 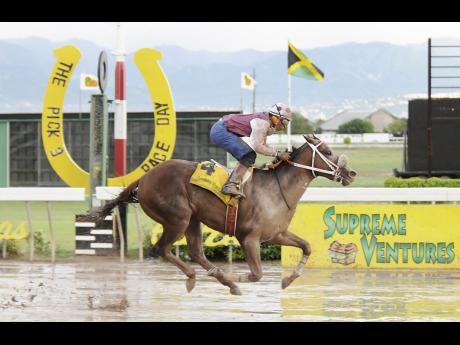 PICK-3 Super Challenge winner ALACRANN was sold to a partnership of Trinidadian owners - Stephan Narinesingh and Christian Gokool - after Barbadian Elias Haloute was presented with an offer "he could not refuse", trainer Anthony Nunes told The Gleaner yesterday.

Nunes, who trains for both Narinesingh and Haloute, declined to state the purchase price but described it as "a great offer".

Champion jockey Dane Nelson has been retained to partner ALACRANN after being jocked off Dwight Chen's COME DANCE WITH ME following his decision to engage Wayne DaCosta's POLLY B in a match race in the Pick-3 Super Challenge.

"AndrÈ Martin was to have ridden ALACRANN. After he was sold, Gokool asked if the champion rider was available. He knows him. Dane has ridden in Trinidad," Nunes explained.

"I told him Dane was riding BALLON D'OR. He asked if he was available, and I gave Dane the chance to choose," he added, pointing out that Martin, in turn, opted for HOUDINI'S MAGIC ahead of BALLON D'OR.