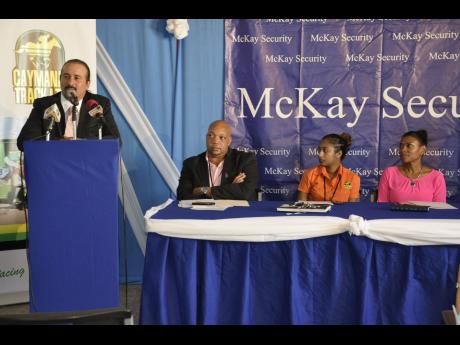 The two association heads exploded after Jason McKay, chief executive officer of McKay Security, hinted that his firm might not be around for another year at cash-strapped Caymanas Park, because of a new bid process for security services at the Portmore racetrack.

"They are lying and that's why they did not come to us, the stakeholders, about this splitting of the security contract," Edwards said, springing to his feet, before the question-and-answer segment of the press conference officially got under way.

The JRTA boss, joined by grooms' president White, declared that if CTL's board pressed on with the tender process, which would result in security services at Caymanas Park being divided into two separate bids - raceday and non-raceday services - strike action would be inevitable.

"Trainers own 63 per cent of the horses here and we are not going to give you our production," Edwards told Stewart, advising him to "take the message" back to his board.

Stewart, who also faced a battery of questions from the press, said CTL's board had made the decision to split the security contract because of instances of theft and what he described as "a breakdown of security at entrances and exits".

However, Edwards, backed by trainer Winchester McIntosh, flatly rejected Stewart's explanation. The JRTA head pointed to the skeleton staff McKay was forced to deploy because of CTL's poor finances. McIntosh, in turn, stated that CTL would be better served spending its money on fixing its perimeter walls than splitting an already existing contract to employ another security firm.

"Tell the minister (of finance) that he is not to go to Cabinet with this foolishness because we, the people on the ground, are being lied to as to the real reason behind this move, and we are not going to sit and watch one of the biggest supporters of racing, and the community, be pushed out of the track," Edwards warned.