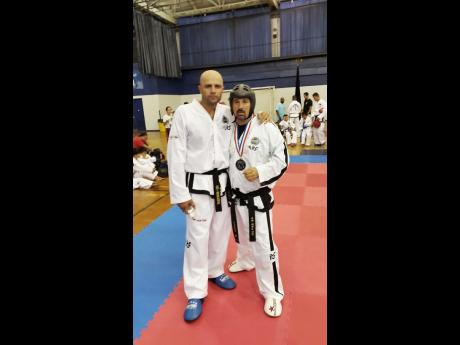 VETERAN fighter Jason McKay is celebrating his 14th qualification to Jamaica's combined martial arts team, which already has a busy schedule for the 2015 season.

Having handed the captaincy to Nicholas Dusard, amid coaching the female team, as well as promoting and organising August's International Taekwon-Do Federation World Cup in Montego Bay, McKay had faced a tough task of accumulating points to make the 2015 combined team.

However, with retirement far from his mind, the combined team founder rallied from five points earned by placing second at the Philadelphia Open, to accumulate 13 in six gruelling weeks, late in the season, on the North American circuit.

McKay's late run, criss-crossing Canada and the United States, propelled him to 10th spot on 13 points, a historic 14th qualification to Jamaica's most successful martial arts group, medalling in two of three tournaments.

"I wasn't that concerned, as I knew I would have been participating on the North American circuit. However, the tournaments were extremely difficult. It was, undoubtedly, the hardest effort to qualify I have ever faced," he said.

To qualify, McKay had to compete against fighters from Vietnam, the United States, Uzbekistan, Ireland, and Canada.

The effort, he said, was well worth his while, as he was three points clear of the 11th-place finisher on the combined team's qualification list.

"In fact, had I scored three more points, I would have placed seventh with 16," he added.

However, despite his record 14th qualification, 10th is the lowest the veteran has ever finished a season. This season was also the first time in four years he had failed to medal at an international tournament.