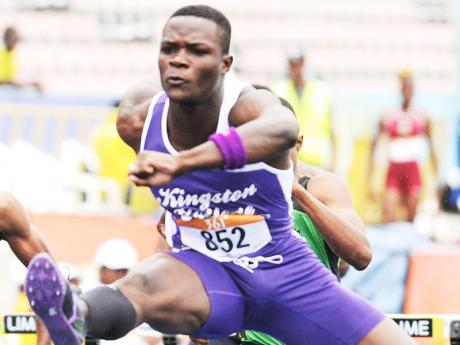 He had to learn to compete indoors against two of the top athletes in the United States (US) Collegiate system and over hurdles three inches higher than he was accustomed to back home.

Over a year after leaving Jamaica for the University of Arkansas Razorbacks, former Manchester High and Kingston College hurdling standout, Omar McLeod has taken to his new surroundings like a fish in water.

McLeod, who ended his high-school career by setting two National Junior records - in the 110m hurdles and 400m hurdles - at the 2013 ISSA/GraceKennedy Boys' and Girls' Championships, took the US collegiate season by storm in his freshman year, winning a National Collegiate Athletics Association (NCAA) title in the 60 metres hurdles in a school record 7.57 seconds in his first go at the event.

Speaking to the Razorbacks website, wholehogsports.com, McLeod admitted to several teething pains when he first left the island for Arkansas, specifically having to run indoors.

However, McLeod, who also had to get used to clearing hurdles three inches higher than the ones used in the high-school system, has left quite an impression in his first season.

"Jamaica is all outdoors with the perfect climate, and when I got here, I hated (running indoors) because it was so awkward," McLeod was quoted.

"Because of the change in height, I was a bit sceptical and scared of the hurdles. The coaches told me not to think about it and to pretend it was a high-school height," added McLeod. "Then the 60 metres are a lot quicker. It's a race from the start, so you have to get out. It's not like the 110 where you have time to build up."

McLeod, who was also named as the best freshman runner for the Southeastern Conference (SEC Conference), which the Razorbacks compete in, was a member of the 1600m relay team, which finished fourth at the indoor championships.

The dynamic athlete continued his form on the outdoor circuit, finishing second in the 110m hurdles at the SEC meet and qualifying for the event at the NCAA championships.

His season was, however, derailed after
he picked up a hamstring injury in the semi-finals at the NCAA
championships, effectively ending his efforts of an indoor-outdoor
sweep.

It's an adjustment and performance that has
raised a few eyebrows, and one that has Razorbacks sprint coach Doug
Case full of praise for the Jamaican.

"When you put it
all in perspective and then throw in that he's a freshman on top of
that, it was a surprise," said Case. "By the same token, when you watch
him practice, you can see he has the potential to do that. What I see in
the guy right now after one year is that he's a big-meet guy. When he
gets to the big meet, he is mentally focused and he's
ready.

"In general, throughout my coaching career,
that's an event that I haven't really looked at a hurdler coming in as a
freshman and expected them to do well.

"Just to make
that transition to the college level is really difficult. And then to do
it without the training we really wanted him to have, and indoors,
which he had never ran, there were so many barriers, and to overcome
that, it was a special thing for him," said Case.

Now,
Case expects the hurdler to continue to develop and impress on the
circuit.

"I don't see him dropping off. He's so
focused on what he's doing. He does workouts with a purpose, and that
purpose is to be the best he can be. That will translate into years of
great performances and years at a high level," noted the coach.