Strickland rolls back the years 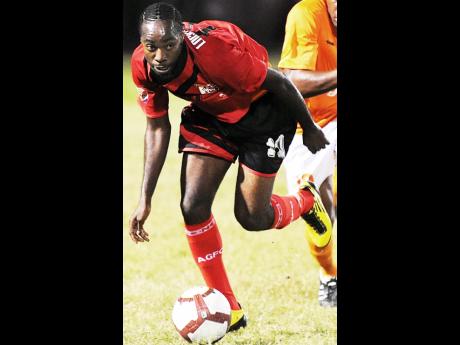 Arnett Gardens' attacking player Leon Strickland continued to roll back the years when his fantastic double dragged his team from 0-1 down to a 3-1 win over Waterhouse FC in the Red Stripe Premier League Monday Night football match at Waterhouse Stadium.

in the 55th and 58th minutes followed up on Dicoy Williams' leveller in minute 45+1. Hughan

hammering a peach of a goal into the far post from almost the right side of the penalty box.

The double by Strickland was a continuation of his fine form, which has seen him find the back of the net six times in five games since the start of the second round.

For the 32-year-old, who was known as a goalscorer in his more youthful days but had seen the goals dry up, it is all about playing the right position.

"What is happening now is not about anything big happening 'enuh'. It is not a big, big difference 'enuh'. It is just that I was playing out of position and doing what the position required.

"I was mostly playing on the wing, wing midfield or wing defence, not in the attack. I was playing like more defensive. Right now I play attack, and I have a free role up front," the former Charlie Smith Manning Cup star said, explaining his return to goalscoring form.

That form, Strickland hopes, will contribute to giving the team what it desires this season.

"We are trying to deliver the cup this season and see where the best football can take us.

"It will take guts, teamwork and a lot of effort to give us the championship. The talent is there, it is just to get that to work in the team system," explained Strickland, who said Arnett Gardens started the season well - on the back of the youngsters - before faltering.

With the addition of experience, he said they have again found their way and are fighting for the title.

So well have Arnett Gardens done, especially in the second round, that only goal difference keeps them off the top of the League.

Strickland said they will be going after the leadership, and with more consistent performances - especially from himself - they will get it done.

"I need to be more consistent to push my team. In tonight's game I was not very good in the first half. I was poor, and after getting the talk from my coach and the teammates, I decided to step it up and take some shots, and the shots paid off," he stated.

"They said I was playing poorly and not putting out the effort. They also said I should put myself in the position and to take the shot when the opportunity presents itself.

"If I can start as well as I did in the second half, then we will do well," said Strickland, who will take the field for Arnett Gardens again on Monday night against Boys' Town.