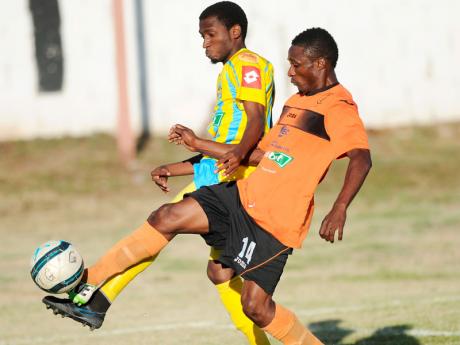 Waterhouses Deandre Brown (left) tries to get a toe to the ball ahead of Tivolis Kemmar Flemming during their Red Stripe Premier League encounter at the Edward Seaga Sports Complex yesterday. Tivoli won 1-0.-Ricardo Makyn/Staff Photographer

Forrest, who came on mid-way the second half for Keammar 'Dada' Daley, picked up the ball and shot past Waterhouses goalkeeper Kelson Cousins in the closing moments.

With the game played under windy conditions, both teams struggled to keep control and did not create clear-cut chances.

stepped up the tempo

However, with the introduction of Forrest, who transferred to Tivoli from Waterhouse last summer, the home side stepped up the tempo.

It was difficult for the visitors as they journeyed to West Kingston with only 13 players. Clearly, Waterhouse who led the league early, were not ready.

Forrest, who did not celebrate his goal as a mark of respect to his former club, was obviously pleased that his team collected three points and moved to 24, in the 12-team standings.

"Well, as a mark of respect I could not celebrate the goal. It would have been disrespectful to a club where I played for many years," Forrest told The Gleaner.

"However, it is an important win for us, as we continue to build towards a top-four finish. It was a good performance," the 31 year-old added.

Forrests coach, Alvin Shaw, disclosed that it was a tactical move to play him (Forrest) from the bench.

"He is not fully fit, so we decided to start him on the bench and give him the last 20 minutes and it paid off." Shaw said.

"Congrats to the players as they are following instructions. They have been working hard in training," the coach added.

Meanwhile, coach of Waterhouse, Anthony Patrick, explained that his team was depleted because of injuries and other reasons.

"We have a lot of injuries, so some young players were used today, Patrick said. We will just have to continue working, and hope to get players healthy," he added.