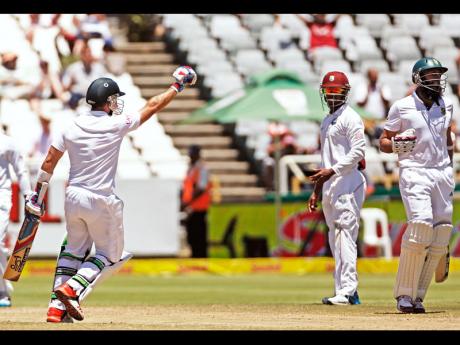 West Indies predictably slumped to their seventh straight series loss to South Africa when they went down by eight wickets on the final morning of the third Test at Newlands yesterday.

Needing a miracle to prevent South Africa from reaching a paltry victory target of 124, West Indies never found such grace and the hosts strolled to a comfortable win 10 minutes before lunch to complete their fourth consecutive series win over their opponents on home soil.

The Proteas have now won 12 of the last 15 Tests against West Indies at home.

Opener Dean Elgar guided the Proteas home in the face of a disciplined West Indies bowling effort, top scoring with an unbeaten 60, while captain Hashim Amla finished on 38 not out. The pair put on 73 in an unbroken third-wicket stand.

Left-arm spinner Sulieman Benn took both wickets to fall in the innings to finish with two for 24 from 17 overs.

Resuming the day on nine for one, South Africa lost Faf du Plessis for 14 on the stroke of the first hour, caught at short backward point by Jermaine Blackwood.

However, Elgar and Amla ensured there were no further hiccups, with a solid stand that took any potential surprises out of the game.

Elgar faced 103 balls in just under 21/2 hours at the crease and struck seven fours and a six, while Amla, predictably voted Man of the Series, struck six fours off 49 balls.

Amla finished the series with 342 runs at an average of 114.

Elgar, who was unbeaten on five overnight, pulled Taylor for four in front of square to break the shackles, but South Africa were content to be cautious as the Windies bowling remained accurate.

Fast-bowler Jason Holder twice cut du Plessis in half with deliveries that jagged back off the seam, took the inside edge and went for fours, but the tourists failed to find an early breakthrough.

Once again, Elgar lifted the pressure by clearing long on with Benn on the bowler's ninth over before hammering Holder to the midwicket boundary a few overs later.

Benn was eventually rewarded for his persistence when he got one to jump from a length and take the shoulder of du Plessis' bat, for Blackwood to run around from second slip and claim the catch at 51 for two.

However, that was to be the Windies' last success. Elgar reached his half-century by gloving a pull over wicketkeeper Denesh Ramdin's head for four as South Africa moved to 86 for two and with all hope diminished for West Indies, Amla then upped the scoring to add further misery.

In fact, 24 runs came from the last 16 balls of the game and it was Amla who fittingly took South Africa over the line, hammering off-spinner Marlon Samuels through point for four.

'We need to take ownership of our game'