For ‘Bigga’, it’s all about the team 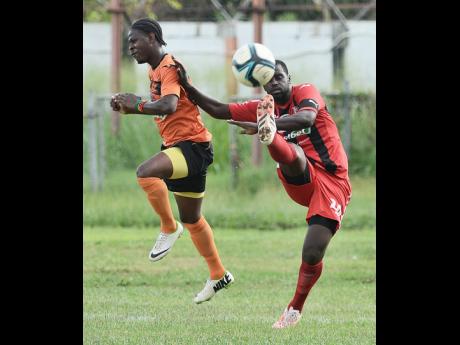 Former national player Oneil 'Bigga' Thompson stood head and shoulders above everyone on the field, and he climbed even higher to power home a header to set Arnett Gardens on their way to victory over Sporting Central Academy at the Anthony Spaulding Sports Complex on Sunday.

The most consistent team in the second round of the Red Stripe Premier League (RSPL) marched to their ninth consecutive win in the league to equal a record shared by Reno FC and Hazard United.

Thompson's strike came in the 69th minute, and the now-prolific Leon Strickland added a second in the 88th minute.

With the 2-0 win, Arnett Gardens opened a gap of seven points at the top of the table.

"It was a good one, but I am more focused on the three points and not the goal," a controlled Thompson said at the end of the game.

Equalling the record with their ninth win in a row, Thompson said, was secondary to the three points.

"What we try to do at Arnett Gardens is that we try to get maximum points every time we go out, so it is not much of a focus on the record. It is more of trying to get as many points as possible, so when it comes around to the semi-final time, we can rotate a lot of people, so we will be fresh going into the semi-finals. That is our focus, not breaking records," Thompson said, as he looked at the bigger picture.

The six-footer was in imperious form, as he was assured on the ground and powerful in the air, as he did not lose a single tackle. That observation was brushed off by the player who made the short journey up from Boys' Town a few seasons ago. What he did he said was simply his job.

"That is my job, enuh, to keep the team focused and tight at the back so we concede nothing. That has been my job for some time, and we need to continue on that path and get some more clean sheets.

"We have had about five so far for the round. It is a good sign, and we are one of the teams that conceded quite a few goals in the first round, including five against Montego Bay United and four against the same Sporting Central. We are kinda getting to understand each other at the back and shutting out people," he explained.

More known as a midfielder since his days at Bridgeport High School and at Boys' Town, Thompson has formed arguably the best central defensive partnership in the league with Dicoy Williams, another player who has represented the national team.

"There is a tight seal around there, and we are no-nonsense. With me and Dicoy around there, you have two players who can use the ball well, and it has improved the team, so, hopefully, both of us and Jabeur Johnson will continue doing that for long," Thompson added, sounding like a future coach.