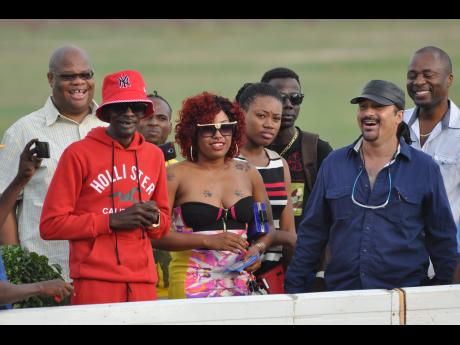 Jermaine Barnaby
Gully Bop (second left) poses with his fiancee and other members of his team, along with Jason McKay (second right), CEO, McKay Security which secures the racetrack and sports personality, Rohan Daley, at Caymanas Park on Saturday.

Assistant racing secretary, Kingsley Gentles, yesterday confirmed that sales from the three previous race meets were $33m, $27m and $35m, all surpassed by Saturday, which featured one of the biggest crowds ever seen at the Portmore racetrack.

"We knew something special was going to happen on Saturday because the crowd started swelling from early, and the betting was looking up," Jason McKay, chief executive officer, McKay Security, told The Gleaner.

"Though he was billed to perform after the last race, people came out early and were naturally drawn to gambling on the horses, which is the whole idea of this series, to get people to the races for entertainment and to gamble," he explained.

Gully Bop, a 50-year-old rejuvenated dancehall veteran, delivered a 20-minute set and was brought back for an encore.

"Once these are advertised, people will turn up. The normal racing public responds, as well as those who come to watch the artistes. Once they are at the races, which even Gully Bop did, they are going to bet on the horses.

"What we do is schedule the series for normal racedays, even Wednesdays, never a big day, because those are the racemeets which need that extra pull," McKay added.