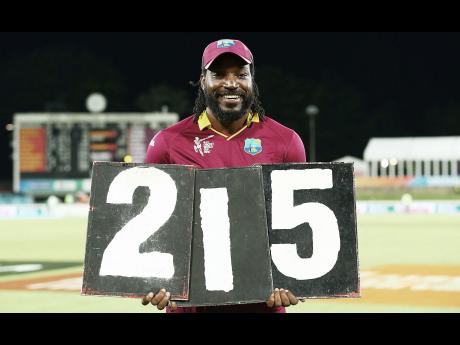 Getty Images
Chris Gayle of the West Indies poses with the scoreboard figures that represent his record-breaking innings of 215 during the 2015 International Cricket Council Cricket World Cup match against Zimbabwe at Manuka Oval yesterday in Canberra, Australia. 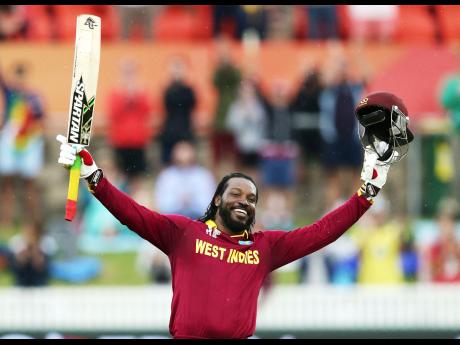 Chris Gayle says he was bombarded with an unprecedented amount of pressure from fans before his multiple record-breaking performance against Zimbabwe in the International Cricket Council (ICC) Cricket World Cup yesterday.

Gayle smashed the first double century in the tournament, fastest ever in one-dayers and shared a record-breaking stand with Marlon Samuels at the Manuka Oval in Canberra.

His effort fired West Indies to a 73-run win over Zimbabwe to post their second win in the tournament.

"It's been a lot of pressure and the runs haven't been coming. I kept getting messages on my phone, as well as on my Twitter," said Gayle, during the post-game news conference.

"I have never felt this kind of pressure, and this is the first time I have seen so many people want me to score runs. I am happy I gave them something to cheer about."

Gayle smashed 215 runs off 147 balls during his whirlwind stay at the crease, forming a 372-run stand with Samuels, who scored 133 runs off 156 balls.

"Eventually, we knew we had to attack because we didn't want to put ourselves under too much pressure. That was my game plan to try and push them back as far as possible. Eventually, it worked," said Gayle.

"I hope it's the start of a new beginning, and I will try and build on this as much as possible."

West Indies are now on four points from two victories and will next play South Africa at the Sydney Cricket Ground on Friday.

"I am quite happy to have gotten this hundred and this will give the team some momentum ahead of the match against South Africa, which is an important one," said Gayle.

"We toured South Africa recently, we know each other well so it's going to be a good contest. We are going to make our best performance speak for itself and hopefully we can come out on top against South Africa."