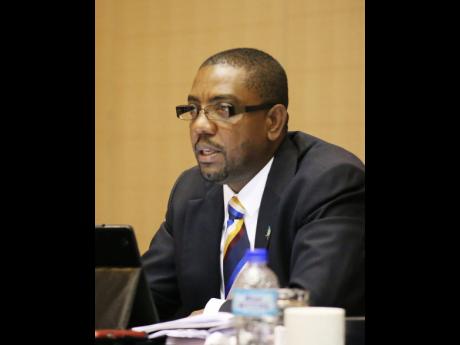 West Indies Cricket Board (WICB) president, Dave Cameron, remains optimistic about the economic fortunes of the regional body despite it tabling negative financial statements at the annual general meeting (AGM) on Saturday.

His positive outlook is due to budget tightening, plus initiatives pursued by the association.

"For the year 2013-2014 the WICB recorded a comprehensive loss of US$1.53 million and we now have a negative shareholders equity of US$5.4 million," Cameron noted during the board's post-AGM press conference on Saturday.

"This, while negative, was actually a major improvement over where we had projected to have been," said Cameron, who defeated former West Indies fast bowler, Joel Garner, 8-4 in presidential elections at the AGM.

According to Cameron, one of the reasons for the losses resulted from a reduction of cricket played by the West Indies throughout the period.

"But with the real hard work, led by our audit, risk and compliance committee, marketing committee and finance committee, we were able to have a much more favourable out-turn," he said.

"In the last four years leading up to now, the WICB has spent close to US$5 million on legal fees, and that is because of the past relationship we have had with the West Indies Players Association.

"In the financial statements for the last period, the WICB has spent no more that US$387,000 on legal fees. That is a major improvement on where we are today."

Going forward, Cameron said they will be conducting economic assessments to improve opportunities for growth.

"One of the things we keep talking about (during the meeting) is the economic impact of cricket to West Indies civilisation," he pointed out.

"We have agreed this year that we will do an economic impact assessment of the West Indies tour and that will be made available to all.

"This is so that we can really start to quantify and measure what we are doing, and hopefully use that to engage our partners as to how we grow West Indies cricket."

The AGM, in addition to its 12 territorial board members, also had in attendance representatives of its seven co-opted special groups.