Six in a row for Kiwis 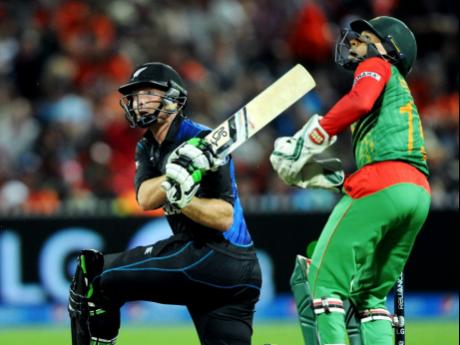 New Zealand entered the Cricket World Cup quarter-finals with a perfect six wins in the group stage and growing in confidence, despite appearing somewhat vulnerable at the end of a tight three-wicket win over Bangladesh yesterday.

In the other match, England finished a woeful campaign with a rain-affected, nine-wicket win over Afghanistan at the Sydney Cricket Ground.

At Hamilton, New Zealand, Bangladesh's Mahmudullah (128) scored his second consecutive century to set up a competitive 288-7 total. Opener Martin Guptill (105) provided the platform for New Zealand's chase, but the tournament co-hosts wobbled getting to the end.

Shakib Al Hasan picked up four wickets for 40 runs and troubled New Zealand's middle order, but Daniel Vettori (16 not out) and Tim Southee (unbeaten on 12) guided the hosts home with seven balls to spare.

"It was a bit of a topsy-turvy sort of game," Guptill said. "They were on top for quite a lot of it, then we fought back and they fought back again. It's just nice to get the win under the belt and show some fight towards the end."

England were eliminated from quarter-final contention on Monday in a 15-run loss to Bangladesh.

Ian Bell scored a composed 52 not out and combined for an opening 83-run stand with Alex Hales, before Hamid Hassan (1-17) had Hales caught behind in the 14th over for 37, including two sixes.

There are two matches today on the penultimate day of pool play - India take on Zimbabwe at Auckland, and Australia play Scotland at Hobart.