Sizzla live at the track 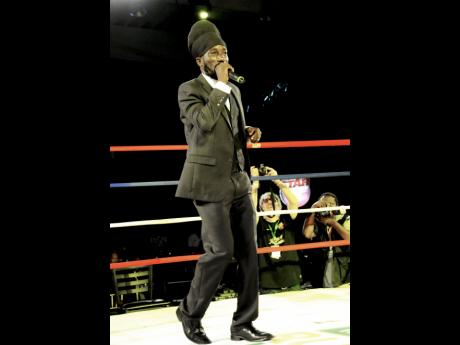 Sizzla Kalonji, one of reggae's biggest names, is the headline act at Caymanas Park this Saturday as the 2015 McKay Security Caymanas Live Entertainment Series picks up steam.

The year old series has featured artistes such as Busy Signal, I-Octane and new sensation Gully Bop, who drew a crowd of 7,000 to the racetrack last month, leading to sales of $37.9m.

Sizzla, whose catalogue dwarfs all who have appeared before him, looks set to pull an even bigger crowd. With countless hits from more than 60 albums, including 21 that made it to Billboard's Top Reggae Album chart, Sizzla is set to have patrons singing word for word.

Jason McKay, chief executive officer, McKay Security, said he is a big fan of Sizzla and most Jamaicans can relate to the artiste's songs.

"When you think of Babylon A Listen, Rise To The Occasion, Solid As a Rock, Can't Keep a Good Man Down , Just One of Those Day, Thank You Mama, even love songs like Woman I Need You, who wouldn't be at Caymanas Park, for a minimal admission fee, to see Sizzla perform?" McKay asked.

Sizzla, along with Capleton, Buju Banton and Anthony B, are credited with leading a movement toward a re-embracement of Rastafarian values in reggae music.

Dexta Daps, an up-and-coming artiste, will also be appearing on the Caymanas Entertainment Live stage on Saturday.

The 28-year-old from Seaview Gardens has promised to deliver an energetic set.

"It's a Jamaican audience that loves vibes and love to enjoy themselves," Dexta Daps said, in anticipation of the Caymanas Park crowd.

"The Jamaican crowd loves energy and I have songs such as Morning Love, 7Eleven, Jealous Over and other releases to have them jumping," he said.