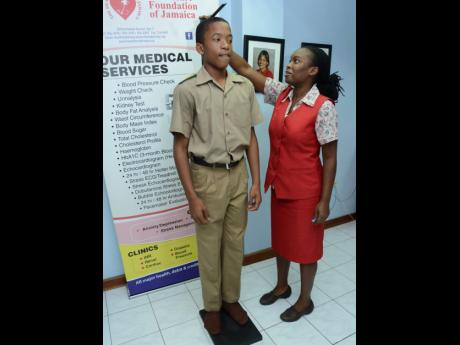 Ian Allen
Brian Smith (left), a student athlete at St Jago High School, gets his height checked by Makheda Campbell-Bryce of the Heart Foundation of Jamaica, shortly after members of the St. Jago Athletics team arrived for screening yesterday.

Former ISSA/GraceKennedy Boys and Girls' Athletics Championships (Champs) winners St Jago High School took what could be considered a first step out of the blocks to prove their athletes are physically fit and ready for Champs 2015, with medical screening of 54 members of their team at the Heart Foundation of Jamaica on Beechwood Avenue, yesterday.

The action underscores the death of former distance runner Cavahn McKenzie who collapsed while competing at the NACAC Cross Country Championship in Tobago last year.

"We want to ensure every athlete is tested and functioning in the right way," the school's throws coach, Deborah Rose, told The Gleaner at yesterday's screening, adding that her team is hoping to upset the odds.

"I think we are there in terms of preparation. We (St Jago) certainly won't go to Champs and roll over. We will come and give our best and, hopefully, claim top prize," she reasoned.

Best friend Jevaughn Palmer is still haunted by his passing.

"He (Cavahn) was my best friend and teammate. We ran regularly on the long-distance team. He seemed healthy and fit and was always hydrating, so I was really shaken up after I heard he died," said the 17-year-old.

He added: "I took my health more seriously after he died. He is very badly missed and would be giving 'Jago' a lot of Champs points in his events," outlined Palmer, who is hoping to medal in the steeplechase.

In the meantime, the Heart Foundation faces a dilemma in getting more schools to have athletes screened.

"We started the screening last June and it has been gathering momentum. We have done McGrath High School, Frome Technical High School and 54 St Jago athletes, with another 100-plus athletes to screen," said Nola Phillipots-Brown, health administrator at the Heart Foundation.

The heart checks are done at a special rate of $1,000 per high-school athlete.

Dr Paul Wright, who is also a sports medicine specialist, is disappointed with the small number of schools taking steps to ensure the health of their athletes.

"Only three schools are on board so far," he said.

"When we (Heart Foundation of Jamaica) did our presentations to ISSA and the Ministry of Education everybody was on board. Now the rates that we have to do are minuscule," Dr Wright pointed out.

He noted that some of the evaluated students are coming in contact with a doctor for the first time in their lives.

The screening process included physical exams done by the sports medicine specialist, administration of a pre-participation questionnaire, body mass index (BMI), waist circumference and blood pressure on the athletes for $1,000, with expressed permission from parents.