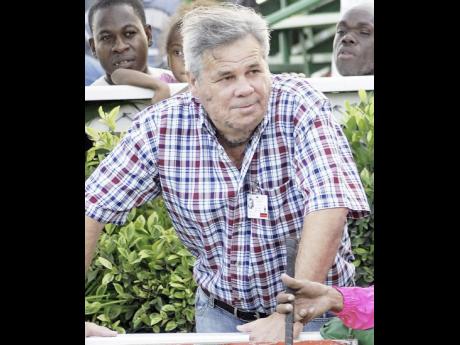 Philip Feanny, 14-time champion trainer and breeder, believes Finance Minister Peter Phillips was not properly briefed ahead of his recent announcement of a reduced tariff, which has left horseracing-industry insiders confused.

The minister announced a tax reduction, 40 to five per cent, for "horses for breeding purposes", where none existed, and outlined a reduction in the tariff which affects all horses imported for racing.

Feanny explained that he was involved in the lobby which led to the announcement, the details of which were misrepresented with no forthcoming correction.

"The agreement was that breeding stock would come in duty free but pay GCT, as it already does, that's mares and stallions imported for breeding purposes. For the racing stock, fillies and colts, 40 per cent would remain on colts, but the fillies would be reduced to five per cent."

Explaining the rationale behind requesting that 40 per cent duty remains on colts, Feanny pointed out that "they add no value to the industry" after their racing careers are over.

"Colts would remain at the same 40 per cent, plus GCT, because they don't assist the breeding industry. Ninety per cent of those that come in, after racing, either join the police mounted troop or go to riding schools. Fillies race then join the breeding stock after that as broodmares," he pointed out.

However, there is a differing school of thought, one shared by Caymanas Track Limited's chief executive officer, Cedric Stewart, and others.

Stewart said allowing colts to benefit from a tariff break, as well as fillies, would further replenish the racing stock which is in dire need of imported horses, especially the higher classes.