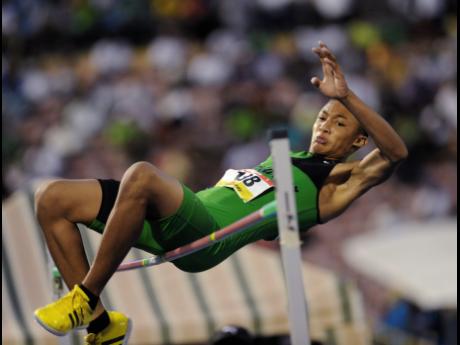 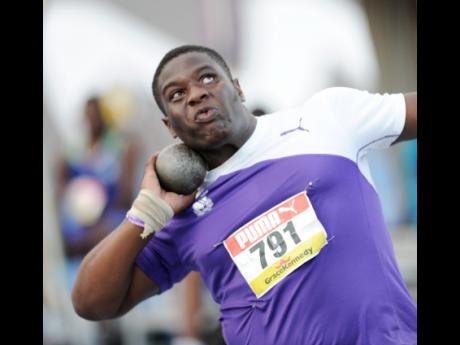 It was, however, agony for Kingston College's (KC) Jhevaughn Matherson, who pulled up injured on the curve in the 200m semi-finals, while chasing rival Tyreke Wilson (Calabar), leaving serious questions to be answered by the KC coaching staff. Matherson only recently returned to the island after receiving treatment overseas and was a doubt coming into the championships.

In the girls' section, defending champions Edwin Allen are out in front after five events on 48 points, ahead of Hydel 32; Holmwood 16; Rusea's 12 and Vere 12.

Reid carved his name in the record books, erasing a 22-year-old mark to win the boys' Class Three high jump in a record 1.99m, bettering the 1.98m set by Ryan Chambers, also of Calabar back in 1993.

Reid's mark was the first record registered in the boys' section and the second of the championships so far.

In the Class One discus final for boys, Edwin Allen's Demar Gayle won with 50.70m - the Central champion was too good for Warren Barrett Jr (Calabar), 49.95m with Petersfield's Sanjae Lawrence taking third with a 49.65m effort.

All the pieces are in place for some real excitement in the Class One boys' 100m, with the main protagonists all booking their lanes in this evening's semi-finals, with an eye on the final later one.

Judging from the form shown in yesterday's heats, today's medal round will be worth travelling miles to see.

Calabar's Michael O'Hara, determined for redemption after last year's false start in the semi-finals, was businesslike in wining his heat with a 11.15 effort, the same time recorded by his main rival for the gold medal Raheem Chambers (St Jago). The other podium spot should be occupied by Calabar's Edward Clarke Jr - 11.47; with Chadayne Walker (KC), 11.19; Waseem Williams (JC), 11.12, and Wolmer's Javoy Tucker, 10.91; Okeen Williams (STETHS), 10.98, all looking well tuned.

Earlier Wilson, 11.23, was an easy winner of his heat with his team-mate Dejour Russell posting 11.15 to also take first spot in his heat in the Class Two boys' event. Raheem Chambers' 10.29 set last year is certainly under threat - even without Matherson.

There was drama in the Class One girls' 100m as favourite Saqukine Cameron could hardly be contained, after getting disqualified after a false start in the heats. The event was won by Vere Technical's Rene Medley in a time of 12.41.

With Cameron no longer a factor, St Jago's Natalliah Whyte, who won her heat in 12.10, is now odds on to win the gold medal, but she will have to keep an eye on Holmwood's Sashalee Forbes, who leads all qualifiers with a 11.97 win in her heat. Wolmer's Shauna Helps, 12.33, who did not report for the 200m, was second in her heat to St Catherine's Shian Hyde, 12.28.

Sasharee Henry (Mount Alvernia) stopped the clock at 11.97 - the fastest time among Class Two qualifiers in the 100m, with Shellece Clarke (Edwin Allen) - the former Class Four and Class Three champion, posting 12.20 in qualifying, the same time as Camperdown's Aaliyah Williams. Hydel's Yanique Dayle, another medal favourite, is also through to the semis with a 12.30 run, but she was not as impressive as her team-mate Isheena Belnavis, 12.06 and Kishauna Smith (Herbert Morrison), who did the same time.