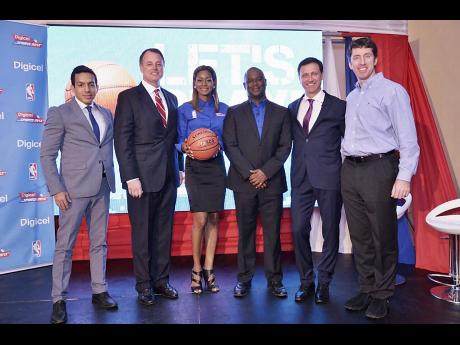 Digicel SportsMax landed a five-year partnership with the National Basketball Association (NBA) to deliver live games and extensive NBA programming to more than 30 Caribbean territories, which would make Digicel the official wireless partner of the NBA in the region.

It will see Digicel SportsMax broadcast up to 48 NBA regular season, and as many as eight, play-off games.

The partnership will include NBA broadcasts in Spanish on the CDN SportsMax channel in the Dominican Republic.

"It's been a great road heading here. The NBA is committed to growing the league in a global market," Phillippe Maggio, NBA senior vice-president, Latin America, told the gathering at a media/press launch at The Jamaica Pegasus hotel in New Kingston yesterday.

"We are excited to bring our passionate fans in the Caribbean more live games and content through the new strategic partnership with Digicel," Maggio said. "We are thrilled to be here to celebrate this five-year deal," he added.

Oliver McIntosh, Digicel SportsMax president and CEO, spoke of the long road that led to this new venture.

"It's been 13 years since our humble beginnings. Then, seven months ago, we became part of the Digicel family. We have grown and worked with sporting organisations all around the Caribbean. We have positioned ourselves in the market," McIntosh said.

"Today, we welcome NBA to the broadcast on Digicel SportsMax. It is a five-year deal. This marks up for one of the deepest partnerships," he noted.

"This is a momentous occasion for Digicel SportsMax. Since our launch in Jamaica in 2001, we are committed to sports. This is a landmark partnership, and we are proud to be a partner with the NBA and looking forward to exciting days," Suranyl said.

The historic deal was expected to kick in last night, with Digicel SportsMax's broadcast of a regular season NBA game.