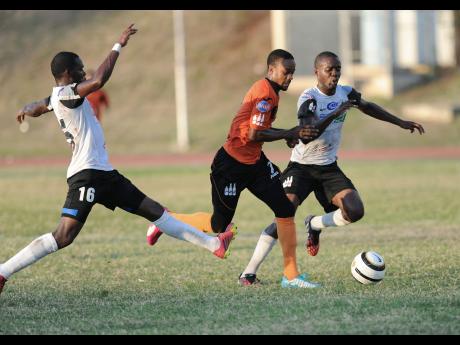 Jamaica College (JC) schoolboy football star Junior Flemmings handed Tivoli Gardens FC a lifeline in their hunt for a top-four finish when he scored in a 1-0 triumph over Cavalier in the Red Stripe Premier League (RSPL) on Thursday at Stadium East.

The all-important victory pushed Tivoli on to 44 points in fifth position, two adrift of fourth-place Humble Lion in the race for the remaining spot in the semi-final. Leaders Arnett Gardens on 60 points, second placed Waterhouse (54) as well as defending champions Montego Bay United (52) have already gained berths.

With three sets of games in the preliminary stage, Tivoli must win all games and hope that Humble Lion do not do the same.

netted in the 63rd minute

Flemmings playing in his preferred striker role netted for Tivoli in the 63rd minute, just a day after he scored for an All Manning team in a 3-1 win over the All daCosta Cup team at St Elizabeth Technical High School.

"Well, it is a great feeling to score the winning goal for my club as it put us in a good position to finish in fourth for a semi-final spot," Flemmings told The Gleaner.

"The red card that they got early in the game really set them back. We had a one-man advantage in a game we needed to win, so the team pressed and got the goal. We also defended well to hold on for a very important 1-0 win," the 19-year-old JC sixth-form student reasoned.

Flemmings came into the team late January in his third season for the west Kingston-based club. He has been playing mostly in the midfield position, but Tivoli's coach Alvin Shaw decided to push the teenager into the forward position, and it paid dividends against Cavalier.

"The coach decided to push me upfront and I scored, so although my preference is to play as a striker, I'm willing to play where the coach wants me to, " he said.

With regards to playing two competitive full games back-to-back days, Flemmings said he was not tired after the Premier League game. "I do train on my own and my fitness level is high, so I was not tired. In fact, while most players rested this morning because of the holiday (Good Friday), I trained in the gym. Whenever I play, the aim is to make a difference," Flemmings said.

He will be leaving JC this summer for a scholarship at New Mexico University in New Mexico, United States, and would certainly love to win the Premier League to add to a successful schoolboy career.

"I have won a lot of titles in football at JC since 2010, when I started playing Manning Cup at age 14. The only title I missed out on is the Under-16 (Colts), so it would add to my rÈsumÈ to win a senior title," he pointed out.

"After almost not playing in the Premier League this season, the Tivoli players are determined to win the title," he explained.

Tivoli will host arch-rivals Arnett Gardens in the RSPL tomorrow at Edward Seaga Complex, starting at 3:30 p.m., and Flemmings said that it will be a difficult game - although Arnett secured a last four place weeks ago.

"It is a do-or-die game for us. Arnett are safe, but we know that they would prefer to avoid playing Tivoli in the semi-finals. They will be coming to beat us," he declared.

Coming off a tremendous schoolboy season that ended in December where JC won the Manning Cup, LIME Super Cup and Olivier Shield titles, Flemming was pushed into the starting team and has been a regular since.

"Coach Shaw was the assistant at Tivoli in my first two seasons there, so when I returned to the team, he was fully aware of my ability. He knew that I had a bit of Premier League and international experience," the former Jamaica national Under-17 and Under-19 representatives said.

Flemmings has great skills in addition to a wonderful football mind, and although the plan is to attend university this summer, he is not ruling out an opportunity to play professional football. "I would love to play in the Reggae Boyz (senior national team) and also professionally," he shared.

Flemmings said, his mother and grandmother apart, JC's manager Ian Forbes, plays a major role not only in his football life, but his personal life as well.