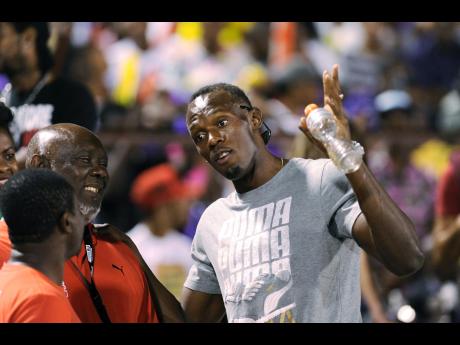 File
Usain Bolt (right) is animated as he has a discussion with his coach Glen Mills (centre) during the recent ISSA/GraceKennedy Boys and Girls' Athletics Championships at the National Stadium.

That was the message from coach Glen Mills to his record-breaking charge Usain Bolt, ahead of his three-year swansong, which gets going with a return to Beijing for this year’s IAAF World Championships.

Bolt’s tour de force kicked into gear almost seven years ago in the Chinese city at the 2008 Olympic Games, with the Bird’s Nest providing the stage for the birth of one of the greatest sportsmen of all time.

“As you know he (Bolt) has expressed from his standpoint that he is in a three-year programme leading up to retirement because he said he would bow out of action after the World Championships in 2017,” reasoned Mills during a recent chat with the Sunday Gleaner, before throwing some doubt into the mix. “People have always set retirement times and sometimes they go back on it so we wait and see if it becomes a reality.

“In the immediate present, he is working towards going back to Beijing, this time for the World Championships. So far I think we started out at a low intensity but we have picked up significantly and he has a promotional race in Brazil and a couple that are being announced and the plan is to use those races to get into competitive condition leading up to the World Championships,” Mills added.

The coach, who has been working with Bolt since 2005, shared his conversation with the sprinter, ahead of the start of the season.

“I told him that despite the fact that he has achieved all that he has set out to achieve in the sport, as long as he is competing ... he has to maintain the standard that he has set for himself and its important because if he doesn’t he could hurt his legacy by hanging around and performing at a level below his standard,” Mills said. “Not many people remember vividly the past accolades, they tend to go by what you’re doing now and it's important that as long as you’re in the sport actively, that you maintain the standard that you have set. That has got to be the motivation going forward - protect your legacy.”

Bolt has so far been confirmed to compete at Diamond League races in New York (June 13), Paris (July 4) and Lausanne (July 9).