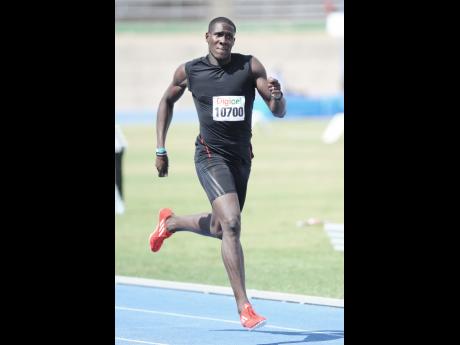 Ricardo Makyn
Leford Green competes in the men’s 800m at the G.C. Foster Classics at the National Stadium on Saturday, March 13, 2015.

A spot in the 400m hurdles final at the 2012 Olympic Games brought much promise for four-time national champion, Leford Green.

However, as the athlete is all too ready to admit, since then, things haven't gone to plan.

Green, who also featured in two World Championships finals - in Osaka (2007) and Daegu (2013) - has returned home, pairing the 400m knowledge of Bert Cameron and the hurdling expertise of his long-time United States-based coach, Lennox Graham, in an effort to put some life into his career and push on to the next level.

With Graham still playing an integral role in his training programme, the 28-year-old has been working out with Cameron and his Cameron Blazers group at the Stadium East facility since January, in a fusion that he hopes will improve his quarter-mile ability and bring the best out of him, with the World Championships on the horizon.

"To be honest, since London (2012 Olympics), I don't think I have accomplished much, to be fair," admitted Green. "The main goal for me right now is to run consistent 45-second times in the 400m.

"Historically, when I run my best 400m races, I also run my best 400m hurdles. So, for me, it's all about running consistently at that level, and that's why the partnership with Bert Cameron is a good one, because I think he can get me there, and that will, by extension, improve my 400m hurdles times.

"It's really a joint venture between Lennox Graham and Bert Cameron. It's about getting me to perform to my full potential. It's a combination; they exchange ideas, and they both have the same interest in getting me where I need to be, and that's what we are working towards," said Green, the 2011 Central America and Caribbean champion.

Green, who was previously based in the United States, said that he has been adjusting well to the new programme.

"The transition is not that bad, still. It's about coming back and adapting to life itself," he said. "I've been working with Lennox Graham so long, for 11 years. So just stepping out and doing another programme is challenging. It's different. It's not something that you are used to, but we are making the best of it."

Regarding his new training situation, Green continued: "It's really interesting because both coaches bring something different to the table. Lennox Graham is a great hurdles coach; he's a great coach overall, and he brought me a lot of success from high school, straight through college, the Olympics, and World Championships.

"Everyone knows what Bert (Cameron) can do with the 400m programme, and that's something I need as well."

In his single individual appearance to date, Green, who has a 400m hurdles personal best of 48.47, posted 1:57.12 in an 800m race at the G.C. Foster Classics at the National Stadium last month.